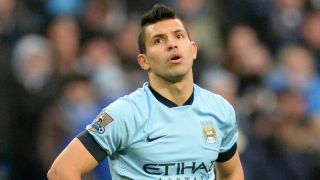 Aguero's layoff to a knee problem saw him lose momentum in a season in which he produced 16 goals in 14 games.

Aguero threatened in City's 1-1 draw at home to Hull City, and earned the foul that led to James Milner's equaliser at Eastlands - and Zabaleta said he was not far from delivering goals to a desperate City side.

"He made a few good runs in the last 20 minutes," Zabaleta said of Aguero's game against Hull, as reported by the Manchester Evening News.

"We need Sergio to come back to his best like he was in November, December when he was doing everything for the team - scoring goals, working hard for the team.

"But after being injured for a long time, for some players it is difficult to come back to his best, in terms of fitness.

"It is the same thing with Edin Dzeko. We know they are really important players for the team. They are the strikers.

"We need them in the best form because the team always needs the best players in very good form during the whole season if you want to win something.

"Last season we had that with [Alvaro] Negredo and Kun doing really well for most of the season, then Edin Dzeko being fantastic for the last three or four months.

"That is what you need to be a better team."

Zabaleta, an international team-mate of Aguero's with Argentina, said he feels the striker - who is second to Diego Costa (17 goals) in the golden boot race - can still get back to his brutal best.

"I am sure Sergio will come back to his best," Zabaleta said.

"It is about confidence as well. The strikers need to feel they are in a good moment.

"Scoring goals is the best thing for them and I am sure as soon as Sergio scores one goal then he will again be one of the best strikers in the league."