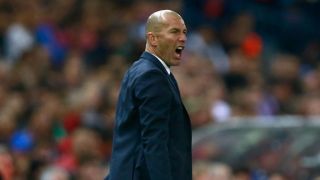 Zinedine Zidane's next target should be to target domestic dominance to go with Real Madrid's exemplary record in the Champions League, says Michel Salgado.

Madrid are gunning for a third title in four seasons in Europe's premier competition after beating city rivals Atletico Madrid 4-2 on aggregate in their semi-final tie.

If Los Blancos can defeat Juventus in the final they will become the first team in the Champions League-era to successfully defend the title.

Madrid are also in a great position to win LaLiga, but know only three victories from their remaining three matches will be enough to claim a first league title since 2012.

"He could be the man who makes history winning two Champions Leagues back to back, and it is also important at the same time to win La Liga as we miss it," he told Omnisport at a FIFA Legends event in Bahrain.

"We've won just one in the last 10 years and I think it would be important for the club to win it again.

"One thing is to be successful at Europe, something which delights us, but we should try to dominate in Spain too because the fans deserve it.

"To sum up, Zidane's work is wonderful, he has been able to lift trophies within just one year and I think it is a period of joy for the club.

"The fans love the manager as they used to do before, and he can get trophies for the club too."

Zidane has only been in the job since January 2016, taking over following Rafael Benitez's ill-fated and short-lived reign.

And Salgado believes Zidane's ability to man-mange his players effectively has been crucial in transitioning to head coach.

"It is difficult to say what the secret is. There are many things together," he added.

"He arrived in a very difficult period when a new project had just started with Rafa Benitez. It didn't work and the mentality was quite pessimistic.

"The key for Zidane is the good impact he made on the players. They trust him and he got control of the dressing room.

"The players rely on him and winning the Champions League after five months gives you extra energy and he took advantage of it."