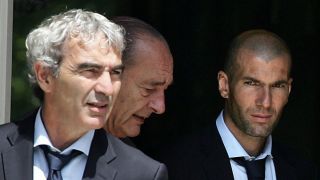 Raymond Domenech has claimed Zinedine Zidane is "not a nice guy" and "will be judged on results" at Real Madrid.

Zidane was named the new Madrid boss on Monday, succeeding Rafael Benitez, after stepping up from a similar position with the club's reserve side Castilla.

The former Madrid midfielder is revered in the Spanish capital for his time as a player at the Santiago Bernabeu.

But Domenech, the coach of the France team that reached the 2006 World Cup final - a game in which Zidane was sent-off for headbutting Marco Materazzi - said there was more to the 43-year-old than met the eye.

He told Le Monde: "Zidane is a myth. A myth capable of setting off emotions in people, and not only positive ones.

"He's capable of anything and that's what makes him a human god."

That status could change depending on whether he succeeds at Madrid, according to Domenech.

He added: "From now on, Zidane will be judged on his results. If he's a champion, his legend will reinforce itself.

"But if that's not the case, it will be another story. [Former Chelsea manager Jose] Mourinho was a god too and we see what's happened to him. Sport is ruthless."

Should Zidane prove a success in management then Domenech believes he could end up succeeding Didier Deschamps as France coach.

"There's no-one more legitimate than him to replace Didier Deschamps," Domenech said. "And the day that Didier stops, he will take over from him. But for that to happen, he had to go to Real Madrid."