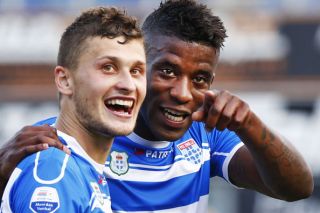 The traditional strugglers had a slice of luck in their 2-0 victory over Cambuur on Saturday as striker Guyon Fernandez appeared to control the ball with his hand just before scoring the opener, while Zwolle's second goal came from the penalty spot through Rochdi Achenteh.

It was Zwolle's fourth straight win of the season and took them top of the Eredivisie with a two-point lead over PSV Eindhoven.

"I am not one of the people in the stadium who have seen (the handball) but Guyon said he did (use his hand)," Jans said after the match.

"We had trouble getting to the football but we definitely deserved to win.

Zwolle-born Jans played for his hometown club from 1976-1983 and after two tumultuous periods coaching Heerenveen and Standard Liege, decided to return to PEC as manager.

This was despite his family hinting he should consider a break from football.

"I wanted, after my resignation from Standard, to just do something I wanted," Jans said.

"At PEC Zwolle I feel at home and I can build something here."

Park Ji-Sung's late strike saved PSV from defeat in their 1-1 draw with Heracles but head coach Phillip Cocu was not happy with the Eindhoven club's performance, particularly after their spirited 1-1 draw with AC Milan in the first leg of their UEFA Champions League qualifying play-off on Wednesday.

"There was no composure in the team," Cocu said.

"We had no patience and when players lost possession, they didn't work hard.