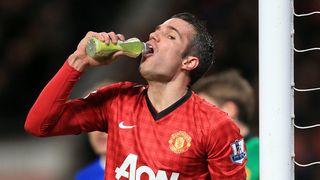 Do I really need to drink Lucozade Sport? Surely, water does the job, right?
Water isn’t the bad guy, but neither is Lucozade Sport. Both boost hydration, but the latter can keep you running from the first whistle, to the last. “If you’re training or playing for 60 minutes or more your energy stores will need refuelling to keep your body going,” says Aston Villa’s head of performance, Michael Watts. “Sports drinks include carbohydrates, normally in the form of sugars, giving you an energy kick. They also contain electrolytes, which enhance the absorption of fluids to keep you hydrated.”

Why should I choose a Lucozade Sport over water?
It’s not a case of choosing one over the other. It’s about optimising your performance with the right hydration strategies. It’s about knowing when to use Lucozade Sport and knowing its ingredients can push you on that bit further. “Water simply provides water with some minerals. Water does not provide any glucose or electrolytes such as sodium and potassium,” says Mayur Ranchordas, Newcastle United nutritionist. “In other words, water does not provide fuel or help you replace electrolytes lost in sweat. Lucozade Sport can. I would choose Lucozade Sport over water during long training sessions.”

So once it’s in my system, what happens?
Don’t worry, you’re not going to collapse on the pitch, convulse and transform into a big green monster. Let our experts explain the science. “The glucose in sports drinks increases blood sugar levels, which provides fuel for your working muscles and the sodium helps with the absorption of the fluid,” explains Ranchordas. Watts adds: “Your energy stores will deplete as your body uses energy so if you continue to exercise you will need to replace the energy you burn. A sports drink can help with this.”

I’ve seen a lot of the players in the Premier League drinking Lucozade Sport. How do they build it into their diet?
If it’s good enough for footballers at the top level, it’s good enough for Sunday League shovel footers. “Our players drink Lucozade Sport Lite as we want to limit the amount of calories they’re consuming,” says Watts. “We offer our players Lucozade Sport during high intensity training sessions. It’s also available during matchdays.” Ranchordas adds: “Most players have Lucozade at half-time and sometimes during and after the warm up.”

How do the pro players benefit from drinking Lucozade Sport?
When you’re running further than Mo Farah did in the 10,000 metre Olympic Final you shed more sweat than a Brit abroad. You need to replace these fluids otherwise your finely tuned machine will shut down. “The physical demands put on a pro player are really high – both in training and in a match”, explains Watts. “A player can cover up to 12km in a game (7.5 miles) and at least half that in training. Sessions will often last up to 90 minutes so it’s important that the players rehydrate and refuel during exercise.”

Right, I’ve got it. Now what else should I include in my matchday kitbag to keep me fuelled?
To work harder for longer you need to ensure your body is fully charged with the right nourishment. Throw a bottle of Lucozade Sport into your kitbag, along with some fruit and you’ll be good to go. “Fruit can offer a good source of quick energy and is a healthy option too,” advises Watts. “I would also recommend some form of recovery drink, or bar for after a game or training.” If you’re looking for specifics, go for a banana. “They’re great to have an hour before kick-off or even at half-time as they provide carbohydrate, which is quickly absorbed and also potassium, which is lost in sweat,” says Ranchordas.

For more hydration tips:
The dos and don’ts of hydration
Hydration is key
Alex Oxlade-Chamberlain: Maximise your training
Gareth Bale: Boost your performance