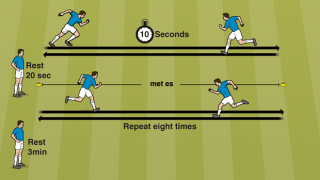 This is a maximal intensity exercise and requires a pair of cones, positioned 26 metres apart.

The player begins at one cone and sprints to the second cone before turning back and running back to the start within 10 seconds. The player then rests for 20 seconds, before repeating eight times to make up a four-minute block. Then he takes a three-minute rest before repeating three or four more times. It’s a really tough exercise and definitely not a drill you would put on for someone with an injury concern. It’s a repeater, so you’re looking at maximal repeated effort. This is really top end anaerobic work. It’s known as the Tabata principle and it’s for conditioning players quickly, although you do need a base fitness. It’s also really good during the season too, particularly if players haven’t been playing many games and need some extra fitness work.

This is certainly something that you could couple with strength and conditioning work, so body-weight squats might be a good accompaniment to this exercise. You could perform squats for 10 seconds, then rest for 20 seconds, then repeat in a similar four-minute block. You could also use the same philosophy and do push-ups for the same time. That will give you some all-round conditioning but again, it’s really tough work.

Recommended for you:
Time to pull your weight
Four steps to five-a-side fitness
Get your kettle on
Manchester United match fitness
Release the beast
The living room workout