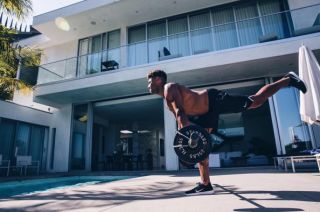 Do you set yourself personal goals?
You don’t set yourself goals in pre-season, other than getting yourself as fit as possible so that you’re ready to go for the start of the season. Once the season starts you start setting goals. Pre-season is mainly about making sure you’re fit and prepared as you can be. All the players at Arsenal understand the standards that have been set from last season so we know what is expected of us.

How important is pre-season for gelling the team together and getting to know the new players?
When a club brings in new players during pre-season it’s vital for them to have a few weeks to get to know their team-mates, what the manager expects and to settle in.

What would you say to an amateur player who was struggling to get motivated for pre-season?
The harder you work in pre-season, the easier it will make your life come the start of the season. If you’re fitter than everyone else, you can run harder, faster and longer. A good pre-season will mean you’re physically and mentally prepared – giving you an advantage over your opponents.

In FFT’s pre-season training supplement, we’re encouraging players to improve their speed. Acceleration is one of the elements the guide focuses on. How did you work on your speed off the mark?
When I was younger I worked on building power and strength in my legs to boost explosive acceleration off the mark and it really helped. If you want to be quick off the mark, this is something I would focus on because acceleration can make all the difference on the pitch.

What advantage has this given you?
It gives you an advantage in crucial areas of the game – gaining half a yard to get a shot off or whip in a cross. Acceleration is the most important thing about speed because it enables you to get to the ball first and you can get away from players. Football is a game made up of short, sharp bursts of speed. At Arsenal we work on explosive power, but a lot of things we do are focused on injury prevention and maintaining what we already have. If we have an area of weakness we will go and work on that individually with the physio or fitness coach. It’s more to do with what you need as an individual rather than everyone doing the same thing. Some people are naturally very powerful and the last thing they want to do is weights and get even bigger. They might need to do more core work. Some people are slimmer and not as powerful and they need to do more power training.

What tips would you give a young player who wanted to improve their dribbling speed?
My youth team coaches used to say to me, “The ball is your friend don’t lose him”, and “Keep your head up”. This advice has served me well. When you’re running at speed with the ball at your feet you want to be able to see what’s going on around you so that you can make the right decisions. You can practise dribbling anywhere – on the street, in the garden – taking the ball around poles, bushes, cones. The more familiar you are with the ball, the better.

What sort of difference can speed endurance make out on the pitch?
If you’re someone that can still produce your top speed in the 90th minute you’re going to be a massive asset to your team. How many times do you see teams score important goals in the dying moments? Being able to produce quality and speed from the first minute to the last is crucial. At Arsenal we do a lot of fartlek training, like box-to-box runs, which involve a strong run, followed by a jog, followed by a strong run and so on.

How valuable is speed to a footballer?
Speed is vital. If you’re quick you can beat players to the ball and burst away from defenders. When you’re in a foot race, keep your head up and arms by your side, driving your knees forward and high, focusing on generating power in your strides. But pace isn’t all about running speed; it’s about speed of thought. Santi Cazorla is one the slowest over 40 metres, but he’s one of our best players because his decision-making is so fast and so decisive.