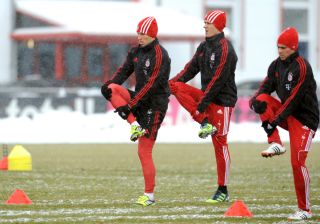 Poor pitches
Youngsters in Brazil play football on the streets, waste grounds and concrete surfaces all over the country. Why? Because they love the game. As long as pitches are safe and players aren’t at risk of injury then players should be encouraged to see the positive outcomes of playing on such pitches. Players can improve their ball control, learn to adjust to the movement of the ball, and develop aerial passing ability over longer distances, as a result of bad playing surfaces. It’s not ideal, but if training is approached properly, there are lots of positives to take from playing on poor pitches.

Fixture congestion
With fixtures coming thick and fast, it’s important to adjust training intensity accordingly and tailor it around the needs of the individual. There are numerous ways you can ensure players avoid becoming drained by a high workload. Longer rest periods, more coaching interventions during sessions and tactical walk throughs are three great ways to tone down training intensity to ensure players remain fresh for games.

Drop outs
Find creative ways to ensure drop-outs don’t affect your session quality. A common problem coaches face is having an odd number of players. Try to use the extra player as a neutral who is conditioned to a set amount of touches. Attack vs defence, where the attackers have an overload and therefore defenders need to defend with less players, make training so challenging that the game seems easy. And if you find yourself down to 10 men during a game, you’ll have had the perfect preparation.

Demotivated individuals
If a player has had a poor start to the season and is lacking in confidence with fixtures coming thick and fast, then try and set them targets that are specific to their development needs to keep them motivated. Does one of your players not use his weaker foot? Add in an incentive, whereby his team scores two points per goal scored when he uses his weaker foot in the build-up. Got a forward that takes too many touches? His team scores two goals if he finishes with one touch - be inventive and set them a challenge.