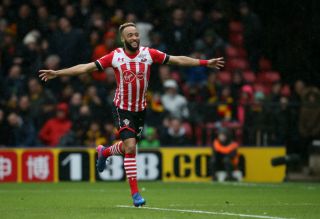 You played off the striker at times last season – how have you found it?
It’s been a good learning curve for me. I’ve mainly played as a winger in my career, but the manager asked me to play in a more central role and it’s something I’ve enjoyed. If I’m able to play in any position across the front four then I give him more options, which is great for the team.

What attributes must you have in order to become an effective No.10?
You need to be the linkman between the midfield and attack. It’s important to stay close to the striker as well and play around him. Your responsibility is to create assists and score goals. You need to always be on the look out for space to get on the ball so you can feed the striker and two wingers.

Is there also additional defensive responsibilities in this position?
Definitely. As soon as you don’t have the ball you need to work with your striker to press the centre-backs and unsettle them. And you also need to be aware of your position in relation to the midfielders behind you. If there is too much space then the other team’s playmaker could do some damage.

Is it more difficult to find space compared to when you’re out wide?
You will always find space if you drift and have good players who understand how to draw defenders out of their comfort zone. There are a lot more balls into feet and one and two touch play as a No.10 – and you have to move the ball quickly and make fast decisions.

Which position is more physically harder – attacking midfield or winger?
It is a long afternoon when you play out wide because most full-backs you face in the Premier League now are attacking and you have to be so careful not to leave your flank exposed. I think positioning is so important, though, if you have a good understanding of where exactly you need to be at certain points of play then you don’t have to run as far.

Do you think it’s vital for attacking midfielders to contribute goals?
Yes. It was a big target of mine last season. I know I need to score more goals and I’ve put myself under pressure to do so. I feel like it’s a part of my game I’ve improved. When I’ve gone through periods where I haven’t scored goals I haven’t worried because I’m always confident if I keep occupying the right spaces I’ll score. The manager says he’ll only ever be worried if I’m not getting into the right areas.

How important is it to vary the way that you attack opposition defenders?
It’s huge for wide players. I like to drift inside off the touchline and pick the ball up in between the lines to keep the opposition guessing. Sometimes I’ll dart back outside or play a quick one-two, which helps to give my team-mates different options to find me and avoid becoming predictable.

Defenders hate coming up against pace – is it the same for wingers?
It can be, yes. If a defender isn’t the quickest, sometimes all you need is a burst of acceleration to get away from him. If he’s fast, it can develop into a game of cat and mouse because you know that physically he’s capable of keeping up with you and forcing you back down the pitch. In the modern game, though, you need more than just speed if you’re going to become a top winger.

Do you study other attacking players to improve your skill set?
Yeah, when I was younger I loved watching Ronaldinho, Thierry Henry and the Brazilian Ronaldo, but I still watch and appreciate players I play against. People like [Lionel] Messi, Neymar, Willian, Pedro, [Manuel] Lanzini are brilliant at beating men in different ways and I certainly look at them and try to take bits and pieces from their games.

How much individual training do you do?
I mainly focus on watching clips of the opposition’s defensive unit. I’ll look at any trends in the way they operate and see if there are any weaknesses I can exploit. I also like to watch individual clips of both full-backs and the centre-backs so I can see what their positioning is like and way they play out from the back. I’m never too worried about watching footage of them attacking – I’m concerned with how I can hurt them.

Who is the toughest defender you’ve faced in your career so far?
When I was 17 or 18, Birmingham played Chelsea twice in the FA Cup and I found Branislav Ivanovic very difficult to play against, as he was so physically dominating and very big for a full-back. I was still a boy at that time. Then there was Bacary Sagna who used to bomb up and down for 90 minutes. The season I had in the Championship, taking on defenders who are far more aggressive than those in the Premier League, really helped me to adapt to playing against different types of players and develop different ways of beating them.

Redmond was speaking at an event for Sure - an official partner of Southampton FC. Join in the conversation on Twitter by following @Sure and tagging #NeverMoreSure