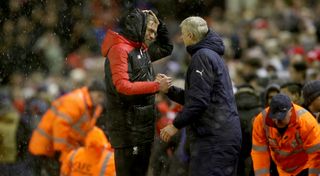 Arsene Wenger
"His body movements are really interesting," says Beattie. "When he shrugs his shoulders with his palms up, that is his way of saying he doesn’t agree with something. It is a very defensive movement and almost a sign of surrender – he is bowing to the weight of pressure and expectation. However, Wenger’s body language can change very quickly from defeated to borderline aggressive – this is his way of saying ‘I’m not finished yet.’ He is refusing to throw in the towel."

Jurgen Klopp
"Jurgen Klopp’s body language is fascinating. He likes to project this image of being super-happy at all times, but of course that isn’t humanly possible. He has found a coping mechanism to disguise any negative emotions. It is very difficult not to reciprocate a laugh or a smile, so it is a good way of changing the atmosphere at a press conference. Chimpanzees bare their teeth aggressively to signal a lack of fear and perhaps that is what Klopp is trying to do as well."

Tony Pulis
"Standing up is often a display of status and an attempt to gain control of a situation. There is a link between height and power, so when someone stands above us, it can give them an air of authority. In Pulis’ case, he is showing everyone who is the leader and looking over the reporters like a teacher, which gives him a strategic advantage. His feet also remain firmly planted on the ground and hide any shifty movement, which could reveal his true emotions."