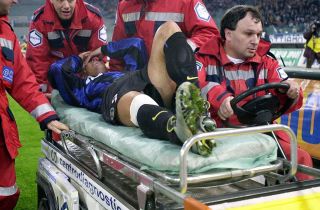 Football had never since anything like Ronaldo. He was six-foot, could run 100 metres in 10.3 seconds and had more tricks up his sleeve than a magician. By the age of 23, he’d broken the world transfer record twice following moves to Barcelona and Inter, scored over 200 goals for club and country and was a two-time World Player of the Year.

He was a seemingly unstoppable force, christened ‘Il Fenomeno’ (The Phenomenon) by the media and fans across the world. But then the unthinkable happened. After complaining of pain in both of his knees after the 1998 World Cup, he suffered a series of career threatening injuries, one of which kept him out for over 12 months. He eventually made his return, winning the World Cup in 2002 and World Player of the Year for the third time. He remained a great goalscorer but was robbed of the explosiveness of his early years.

Seventeen years after suffering the injuries which nearly forced Ronaldo to retire, his physical therapist, Nilton Petrone, tells FourFourTwo exactly what happened to him and why his body became so vulnerable to injury…

What made Ronaldo such a special athlete?
Ronaldo was genetically gifted with special muscle fibres, which produced a huge power output, We performed several speed tests on him at Inter and we reached the conclusion that Ronaldo didn’t just have speed, but also incredible co-ordination. The way that he was able to dart from left to right was pure co-ordination. The tests demonstrated that he would probably be able to do 100 metres in 10.2 or 10.3 seconds, which is incredible when Usain Bolt ran that distance in 9.8 seconds. He also had fantastic strength – which was another genetic gift. When you combine that with the years of football training he developed the perfect combination of speed, strength, power and co-ordination.

Ronaldo is often called explosive – did the force he produced also make him vulnerable to injury?
There is no doubt about that. Ronaldo had a problem called trochlear dysplasia. This makes the relationship between the kneecap and the femur a bit unstable. There is no direct surgery for that so the kneecap keeps, for a lack of a better word, “dancing” on the femur. As a result, Ronaldo needed constant monitoring so he could keep it as stable as possible, because this was a bone dysfunction of his own development.

Had he been slower, would he have had the same problems with his body?
Athletes that have a lot of power are also at risk of muscle and tendon injuries. Slow individuals normally don’t suffer these types of problems. But Ronaldo’s injuries weren’t because his body was weak, but because of his explosive capacity. He didn’t just run fast in a straight line, he also changed direction at incredible speed. There were several moments when Ronaldo fell, stood up, and then moved from left to right very fast…so it was obvious, by the that way he played, that injuries were always a possibility.

In 1999 he suffered a serious knee injury. What exactly happened and how did he recover?
At the beginning of 1999, Inter had already called Dr Saillant to monitor Ronaldo’s tendons, both in the right and the left kneecap. It was known that the degeneration was relatively big but no one thought about surgery before his injury. The injury happened on November 23, 1999. After 20 minutes, Ronaldo was about to spin and then suddenly stopped. I was on the bench and at that moment we noticed that something wasn’t right. He asked to be replaced and walked normally but when I arrived in the locker room and bent his knee I saw that the centre of the tendon was ripped. This was Ronaldo’s first injury. I did the monitoring and then he went to Paris to have an operation with Dr Saillant. We then did all the rehabilitation monitoring and at the beginning of every month we would go to Paris.

Around the beginning of April, we started to think that he was training normally. He was playing and had already been released by the doctor who performed the surgery and told he could possibly make his return to the pitch. But Inter are very meticulous with rehabilitation, so at the beginning of that month we travelled, with Dr. Franco Combi, who was Inter’s doctor at the time, to talk to Dr. Saillant about the possibility of Ronaldo playing in the final of the Italian Cup against Lazio or the match against Juventus which was two weeks later.

We took Ronaldo to Paris to see the doctor and he said that it was okay for him to play in the match against Lazio. We asked him how much time he would be able to play for and he said 15 to 20 minutes. When he returned for that match, he ripped the knee-cap tendon completely. His knee-cap actually exploded and it ended up in the middle of his thigh.

Were his injuries the worst you’ve encountered in football?Yes. If I showed you the photos I have from this case you wouldn’t believe it. Right after the surgery his knee was the size of a football ball. There were three or four tubes draining the blood, it was something unbelievable. We had a few moments at the hospital when he was crying because he wanted morphine to stop the intensity of pain. One day in the middle of the night he called me and asked: “tell me I am going to be able to play football again, please don’t lie to me”. I was there, at the beginning of a rehabilitation when the whole world was saying that he wouldn’t be able to. The science said it was unlikely and the doctors had doubts. I had a unique experience and I thank God for having the opportunity to overcome that with him and that helped me a lot professionally.

Do you believe Ronaldo was pressured to return too quickly from injury by clubs and sponsors?
No. Well, I can tell you from the moment I met him in 1996 until 2003, which was when I was monitoring him, that this is not correct, It’s not true. If you see, for example, that type of serious tendon injury, some clubs get their players back in eight to nine months. But Inter waited for a year so he could have a pre-season of almost 50 days, so no, I don’t believe that.

How impressed were you with his mental strength?
I often compare Ronaldo to a phoenix. He has this ability to rise when everyone thinks he won’t be able to. Even though he was young, Ronaldo was always mentally strong, he was always very focused on his goals and reaching them. We had a lot of serious conversations about his injuries but he dealt with his problems extraordinarily well.

Was there a chance he wouldn’t return from such a serious injury?
It was really difficult. He had already come back from his first surgery, which he already thought might stop him from playing. Then he had a serious injury with a complete rupture of his knee-cap tendon, which is a more complicated surgery which had a questionable rate of return at the time. Everyone knew that. It was questioned whether he would come back or not, and if he did there was a chance he wouldn’t be a high-level player anymore. We were very careful to make sure he didn’t return too soon. The goal was for him to still have a long career, and that’s why he missed the 2000/2001 season.

How hard did he have work to return for the 2002 World Cup?
It was incredibly hard for him. He had to work for nine to 10 hours every single day without a break. There were a lot of doubts about him coming back, so he had to fight not only with himself but also the media, who predicted that his career was over. Ronaldo eventually came back in August, started to play, and scored a goal, but we knew that when a player is injured for such a long time, training sessions and matches are very different. So we knew that there was the possibility of another muscle injury, which is what happened.

But around 15 days later he came back and scored goal after goal. From September to October and October to February he kept playing and then in February he got injured again in Palma de Maiorca. At that point he started he questioning whether he would return in time for the World Cup and whether he would be able to play or not. We asked Inter’s president at that time to bring Ronaldo to Brazil because we thought it was an important moment for him to be around friends and family.

It was his second muscle injury in five months, which wasn’t so serious, but we thought he should be around his family. We stayed in Brazil for 15 days and returned at the beginning of March. He played the whole month of March, April and May and Inter had a great season. Ronaldo scored around 14 goals. So, he reached a point where he played basically the whole Serie A season, scored several goals and was moving normally. So, the Brazilian team got Ronaldo for the World Cup and the rest is history.

Technically he was still brilliant, but was his knee ever the same again after those injuries?
A knee that undergoes surgery can get better or worse, but it won’t ever be the same. I said to him that the moment he thinks his right knee, which was the one that needed surgery, is better than his left knee, that’s when he will be completely cured. That is exactly what happened a short while after his return.

Recommended story: Why do footballers get ACL injuries?

Did the trauma of his injuries change him as a person?
Yes, there is no doubt about that. The guy went through two injuries, a serious one and an extremely serious one. When Dr Saillant finished the operation, we had a meeting with the board of Inter, and the only athlete they remembered that had been through a surgery like that was Paulo from Portugal, and he didn’t manage to return.

So, Ronaldo broke a huge paradigm in science in terms of a player returning from an injury like that, a complete rupture of the knee-cap tendons, and he returned to a high level again. So, the mental strength that he had to overcome all the barriers…people don’t really know about the pain and the suffering. The pain he had in bending the leg was excruciating. The fear of rupturing it again was also great, and most of all he fear of not being able to function again, and score goals was huge. All these struggles made him more mature.