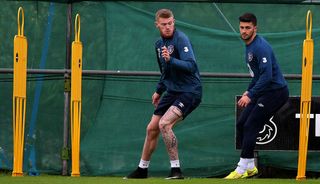 “Are there any other sports I can do over the summer to keep me sharp for next season?”
Terence Hanley, via email

“When I was younger I used to do a lot of athletics – the 100 metre hurdles and high jump were my favourites. These helped develop my speed, leaping ability and quick feet – all of which benefit your football immensely.

Being a striker you need quick feet and reactions in the box because you never know how the ball is going to come to you. Away from athletics, I was also a very keen hurler and played two or three years above my age group.

This prepared me for the physical side of the game because I was playing against bigger people. It helped me adjust to playing in the Premier League and coming up against the defenders in this division. They’re not small men!

I’d like to think that I put myself about as much as I get put about. Hurling toughened me up and sharpened my game. It gave me an eye for the ball, which along with athletics I think has added to my performance as a footballer.”