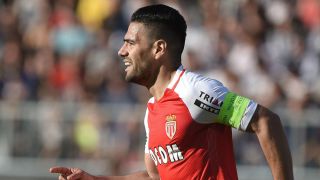 Radamel Falcao netted his 17th league goal of the season as Monaco cemented their place at the top of Ligue 1 with a hard-fought 1-0 victory over Angers at the Stade Raymond Kopa.

Making his first start since suffering a hip injury in February, the Colombian striker claimed what proved to be the winner on the hour mark, calmly sweeping the ball home close range having been teed up by Nabil Dirar.

The goal came completely against the run of play as the mid-table hosts had looked the better side for long periods with Cameroon international Karl Toko Ekambi guilty of squandering three excellent first-half chances and leading scorer Famara Diedhiou seeing a well-struck effort saved by goalkeeper Danijel Subasic.

Having taken the lead, however, Monaco grew in confidence and Alexandre Letellier was forced to produce a string of fine saves to deny Falcao, Thomas Lemar and Valere Germain.

But the visitors almost came unstuck right at the death as Diedhiou's header struck the post with Subasic beaten.

The win, their fifth in succession in the league, saw Leonardo Jardim's men increase their lead at the top of the table to four points and capped a good week in which they also secured a place in the last four of the Coupe de France.

For luckless Angers, meanwhile, it was a first home defeat in all competitions since the turn of the year.