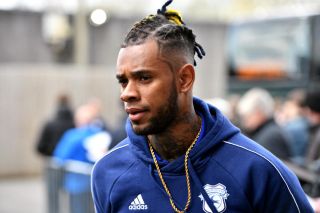 Cardiff’s Leandro Bacuna is determined to avoid an unwanted family double after his brother Juninho suffered relegation from the Premier League at Huddersfield.

The Bluebirds are fighting for their top-flight lives, with a 2-0 midweek win at Brighton boosting survival hopes ahead of Sunday’s visit of title-chasing Liverpool.

Leandro Bacuna only joined Cardiff three months ago, but says his mother has been caught in the crossfire of a relegation battle which has seen Juninho’s Huddersfield drop out of the league.

“My mum was saying to my brother the other day, ‘I want him to win’,” said Curacao international Bacuna, who is 27 and six years older than his sibling.

“My little brother was like, ‘You want him to win but we got relegated’.

“You don’t want both to go down, of course we’re in a situation where we’ve got to fight.

“I spoke to him (Juninho) after he went down and said, ‘Don’t worry’.

“He’s still young, 21, and I’ve been through that situation when I got relegated with Villa a few years ago.

“You’ve got to keep fighting, even if you go down to the Championship.”

Leandro Bacuna made over 130 appearances at Aston Villa and was a regular member of the side relegated in 2016 when the club had four different managers.

But the midfielder says he joined a united dressing room in January and that gives Cardiff a realistic shot at survival, with games against Liverpool, Fulham, Crystal Palace and Manchester United to come.

“The way we are as a team at the moment, we are not blaming each other,” Bacuna said.

“It’s not like picking someone out or picking on every small mistake, being negative.

“That’s the difference I can see between Villa and now.

“But I’m very confident we can stay up as we have some games left that we can win.”

But he earned rave reviews after replacing the injured Aron Gunnarsson at Brighton, with his manager Neil Warnock comparing him to Manchester United midfielder Paul Pogba.

Warnock said: “I said to Gunnarsson after the game, ‘Wow, why didn’t you go off earlier? Thank goodness you’re leaving at the end of the season because we’ve got him’.

“We had a good laugh about that, but everybody wants to be involved.

“It’s a great place to be and you wouldn’t think we were fighting relegation.

“Last Monday after the Burnley game it was all doom and gloom, whereas now it’s great with four games to go.

“We’ve got to rely on a lot of things going in our favour (to stay up), but let’s see.”