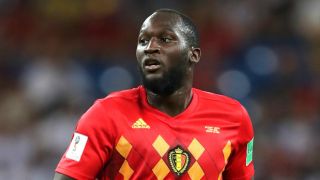 Romelu Lukaku ended a six-game competitive dry spell with both Belgium goals in a late 2-1 home win over a stubborn Switzerland in the Nations League on Friday.

On target twice in a 3-0 defeat of Iceland last month, Manchester United striker Lukaku repeated the heroics as he scored either side of Mario Gavranovic's surprise 76th-minute equaliser.

The 25-year-old looked to have played the part of villain when he blazed over a golden opportunity to restore the hosts' lead late in proceedings, but he regained composure to tuck away a chance instigated by Eden Hazard six minutes from time and send the Red Devils top of Group A2.

The result may provide Thierry Henry with a winning farewell in what could be his final match as Roberto Martinez's assistant - the France great closing in on the vacant Monaco post.

fans say thanks to their heroes for their World Cup efforts. October 12, 2018

After a week marked by investigations into alleged corruption and match-fixing within Belgian football, the hosts almost went ahead through Youri Tielemans' rasping drive in the 20th minute, but it was one of few moments of quality in a subdued first half.

The opener eventually came when Hazard, Dries Mertens and Thomas Meunier were all involved in creating space for Lukaku to squirm the opener under Yann Sommer in the 58th minute.

Against the run of play, Switzerland appeared to have done enough for a point when Michael Lang aided Gavranovic in punishing some sloppy marking from Xherdan Shaqiri's free-kick.

But, after fluffing one fine chance for the winner, Lukaku did not waste a second, squeezing home after a brilliant move involving Hazard and Mertens in the 84th minute to send Martinez's men three points clear atop their Nations League group.

What it means: Six an anomaly for Switzerland

Renowned for their staunch defensive attitude, Switzerland seemed to have begun forging a new identity for themselves in lashing six past Iceland in September. Here, though, they returned to type, demonstrating little enthusiasm for risk-taking against stronger opposition.

Belgium set a pedestrian pace for long passages, but that did not keep the in-form Hazard from his usual flashes of brilliance. The Chelsea ace, who continued to flirt with Real Madrid this week, asked many more questions of Switzerland than his team-mates and it was no surprise that he was the original architect of both Lukaku goals, with a deft backheel for the second particularly eye-catching.

Carrasco out of place

Martinez's experiment with Yannick Carrasco as a left wing-back is yet to convince. The China-based winger looked uncomfortable at both ends of the pitch prior to being hooked immediately after Switzerland's leveller.

Belgium are back in action on Tuesday with a friendly against Netherlands in Brussels, while Switzerland have two days to recover before their Nations League game away to Iceland.