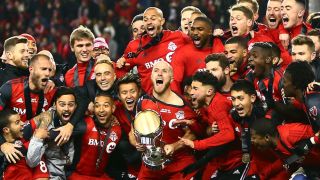 Jozy Altidore and Victor Vazquez scored in the second half as Toronto overcame the Seattle Sounders 2-0 in the decider at BMO Field.

It came a year after the Sounders denied Toronto a first MLS Cup crown by winning the trophy on penalties.

Bradley, who joined Toronto in 2014, said finally securing the trophy was a dream come true.

"This has been the dream for four years, since the day I got here. And for the last year, the dream has become an obsession," the midfielder told ESPN.

"And for this group of guys to work every single day, having to remember last year, to get back here, to play that game, in this atmosphere, with that on the line, it's unbelievable."

As for his critics, particularly vocal after the United States' failure to qualify for the 2018 World Cup, Bradley refused to bite back.