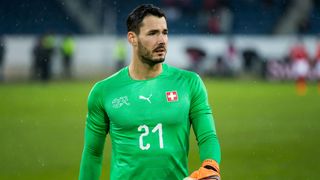 Roman Burki has decided to call time on his international career with Switzerland temporarily in order to concentrate on Borussia Dortmund.

The 28-year-old has been capped nine times by his country but has played back-up to Yann Sommer for much of his international career.

Burki has found his best form against this season after some erratic displays over the previous two campaigns.

With Sommer still first choice, it seems he believes concentrating on Dortmund to be the better use of his time, with BVB leading the Bundesliga at the mid-season break.

However, he was eager to point out he will happily return from his "standby mode" if Switzerland, who compete in the inaugural Nations League Finals in June, are left in a dire situation.

Writing on his official Instagram, Burki, who informed head coach Vladimir Petkovic of his decision in a phone call, said: "You may have already read it: I've decided to move into some sort of standby mode at least this year in terms of my national team career.

"Be sure that this step is far from easy for me and that I have been thinking about it for a really long time. Even writing these lines is not easy for me.

"It was – and is – simply the greatest honour for me to be able to wear the jersey of my home country. There is no doubt about that, none at all!

"I enjoyed and loved every second I was allowed to spend on the grass with this team. And as I said, I do not rule out the possibility of further assignments in the future that would fill me with pride.

"Should distress be on the team, and I would be [deemed] the best possible alternative for the coaching staff, I would, of course, live up to my responsibilities and always help where I can. That's what I promised the association. And I stand by that!

"After six years and three tournaments for the Swiss national team, however, the decision has matured in me during the past few weeks to focus fully on my club, Borussia Dortmund, for the time being.

"I hope young Swiss goalkeepers will take the chance to prove themselves in the training of Vladimir Petkovic and Patrick Foletti and gain important experience around the national team.

"I ask all of you to understand my decision, which will certainly be difficult for one or the other to understand. I assure you that even during the time I am not running for Switzerland, I will be the biggest fan of our selection!"

Petkovic described Burki's move as "a pity for all sides", but stressed: "It is our greatest concern that the national team squad players are physically and psychologically as well as possible, so we wish Roman a quick and complete recovery from his complaints."