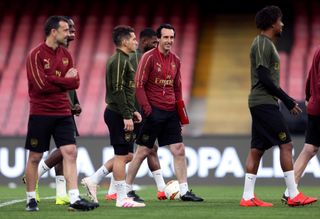 Arsenal boss Unai Emery has hailed Crystal Palace academy graduates Wilfried Zaha and Aaron Wan-Bissaka and insists he has plenty of his own young players pushing for a place in his squad.

The Gunners host Roy Hodgson’s Palace on Sunday and are looking to maintain their place in the Premier League’s top four.

While the Eagles have endured difficult spells during the campaign, Zaha and Wan-Bissaka have often stood out as star performers. They both came through the ranks at Selhurst Park and have been linked with moves away this summer.

Emery singled them out for praise on the eve of the Emirates Stadium clash and explained how nurturing young talent is an important part of his job.

“They are two very good players,” he said of Zaha and Wan-Bissaka. “They are improving a lot and giving Palace a big performance for their success.

“We have here also young players coming from the academy, training with us, playing some matches with us.

“My responsibility is to work with them and give them the possibility to train with us and show the capacity to get into the first team with regularity and also in the future show they can be important players for us.”

Arsenal return to north London having picked up two key away wins. They clinched a nervy 1-0 victory over 10-man Watford on Monday before securing progression into the semi-finals of the Europa League with another 1-0 success at Napoli.

Until then there had been questions about Emery’s side away from home but he believes they have provided the answer – especially after keeping consecutive away clean sheets for the first time since January 2017.

“The first thing is thinking about our game plan then adapting for the opposition but our process sometimes need patience and good results and the players, their focus now is very clear and in this moment they are very concentrated to use our best ideas.

“For example, defensively, clean sheets in the last matches were very important and they take confidence from the clean sheet and afterwards we didn’t lose our capacity in attack to score and win the matches.”

Arsenal will be without the suspended Sokratis Papastathopoulos while Aaron Ramsey misses out having limped off in Naples with a muscular problem.