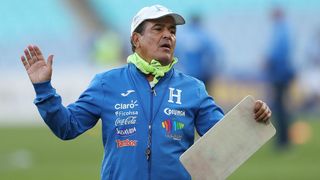 Jorge Luis Pinto accused Australia of "espionage", the Honduras head coach unsatisfied with the Socceroos' excuse after a drone was spotted hovering over his team's training session ahead of Wednesday's World Cup inter-confederation play-off.

A spot at the 2018 World Cup in Russia is up for grabs and tensions are high between both sides, especially after Honduras claimed Australia used a drone to spy on the visiting CONCACAF nation in Sydney on Monday.

The Socceroos – who were unfortunate to only draw 0-0 in last week's first leg in San Pedro Sula – insisted the unmanned aerial device was innocently operated by a family at a neighbouring park next to ANZ Stadium.

However, Pinto dismissed the explanation during his pre-match news conference on Tuesday.

"The incident is embarrassing," Pinto told reporters. "For such an advanced country; when Australia went to Honduras they checked every bathroom, every box at the stadium, where they trained and also [where the game was].

"It's an embarrassing incident. The video shows more than anything, what the drone can show. Takes some of the merit away from the fair play of the sporting event tomorrow."

"Let's not be innocent," he continued. "There is espionage in football.

"Just like VAR [video assistant referee] has made it into football, drones have made their way into espionage."

Pinto added: "Regardless of incident with the drone and the possibility of a Honduras journalist leaking information regarding our team, we are very happy with our welcome and stay here, we are very comfortable - we are just hoping for a good game tomorrow ... we are facing a balanced side.

"We will have to be aggressive and we will be even happier if we can go to Honduras with qualification."