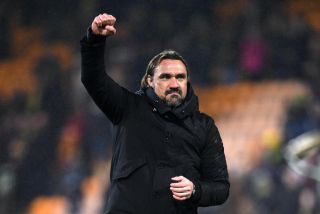 Norwich head coach Daniel Farke has signed a new contract to keep him at the club until June 2022.

The Canaries announced the news shortly before Wednesday’s Sky Bet Championship home clash with Hull, which they were heading into looking to return to the top of the table, lying a point behind leaders Leeds.

Farke was appointed as Norwich boss in the summer of 2017 on a two-year deal, having previously been in charge of Borussia Dortmund II.

The 42-year-old German guided the Canaries to a 14th-placed finish in 2017-18 before launching this season’s push for promotion.

Farke told Norwich’s official website: “I’m over the moon and absolutely happy to feel blessed and honoured to be in this responsible role for this amazing club.

“I made clear from the first moment that I arrived here, it really feels like home.

“From the first minute, you got the feeling that everyone wanted to be successful and the way we wanted to work and the direction we wanted to head.

“Of course, it was a bit of a shaky start after two difficult years for the club with relegation (from the Premier League in 2016) and first difficult year back in the Championship (when they finished eighth). I felt even in these times, there was a lot of support and trust and we are all happy that we have been able to pay back.

“At the moment, it feels a bit like all Canaries are flying and Carrow Road is a pulsating ground with big unity in the club and city. It’s really a great pleasure to work each and every day for this amazing club.”

He added: “It was one of the reasons I wanted to sign, that I’m convinced our path is not already done.

“I’m totally convinced the club is heading into the right direction and all credit goes to our board and (sporting director) Stuart Webber because they are crucial for leading the path.

“A big topic is to make this club a permanent member of the best 25 clubs in the whole country. That means that we are always allowed to play either in the Premier League or to at least fight in the play-off ranks to reach the Premier League.

“That’s our big task, not only to be there with one successful season or to have one good year, it’s more like to make out of this club a really permanent member of the best 25 teams in this country.

“It’s a big, big task, it’s not an easy way to go and there’s a still a lot of work to do with it but I’m happy that I’m allowed to help in a responsible role and to go further on.”