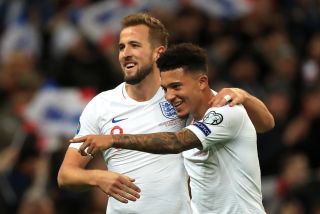 Jadon Sancho will go to Barcelona or Real Madrid before Manchester United, the Daily Star reports. The 19-year-old had been courted by the Red Devils for more than a year, with Liverpool also interested in the winger’s services. But Sancho appears to favour a move from Borussia Dortmund to LaLiga rather than to the Premier League.

The Daily Mirror says Leeds are considering replacements for Arsenal loanee Eddie Nketiah but are hopeful he is not recalled. The 20-year-old can be called back in January if he does not play enough minutes in the north. The 20-year-old has not started this season and has been out with an abdominal injury.

The Leicester Mercury says the Foxes’ Caglar Soyuncu is not leaving the club, according to the player’s agent. The Turkish defender has been linked with moves to Manchester City, Arsenal and Turkey’s Galatasaray. But Mustafa Dogru said the centre-back, 23, was looking to cement his cult status at Leicester.

Patrick Vieira is being targeted by David Beckham to become the first coach of new Major League Soccer franchise Inter Miami, according to The Daily Telegraph. The former Arsenal player has experience in the league, having coached New York City FC before moving to Nice.

Jan Vertonghen: The 32-year-old is interested in a new deal with Tottenham now that Jose Mourinho is in charge, Sky Sports reports.

Kai Havertz: Manchester City, United, Liverpool and Chelsea are among the clubs to contact the agent of the 20-year-old Germany and Bayer Leverkusen midfielder, according to the Daily Mail which cites Bild.