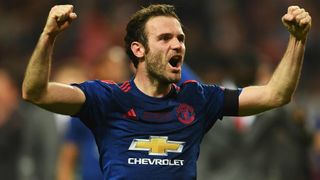 Twenty-two people were killed and more than 100 others injured as a result of a suicide bomber attack following a concert by American pop star Ariana Grande.

The shocking events naturally caused a sombre mood in Sweden in the build-up to the final against Ajax, with United cancelling their pre-match news conference.

Despite the attack, the match went ahead at Stockholm's Friends Arena and goals from Paul Pogba and Henrikh Mkhitaryan secured a 2-0 win and passage into next season's Champions League for United.

Attacking midfielder Mata admitted it was not easy to focus on the game, but the Spaniard was proud to honour the victims and the city of Manchester.

"It meant a lot for the club, for us, especially for the city of Manchester," he told reporters.

"Obviously, we were really, really sad about what happened. We just tried to focus on football.

"Obviously there are things more important than football in life and we tried to focus on the game and to win to try and lift the spirit of the town at least for some hours and we feel proud of that.

"We had to come here we had to play a very important game for us and I think we did the best we could.

"We felt the sadness of the city of Manchester. We try to give the trophy to them that's how we felt before the game, how we feel now and we feel proud to do that and hopefully they can be happy for some hours."

Team-mate Smalling echoed those sentiments, adding: "I think there was an extra determination.

"You can see that the fans were appreciative at the start of the game, both sets of fans, it's good that the game of football can go ahead.