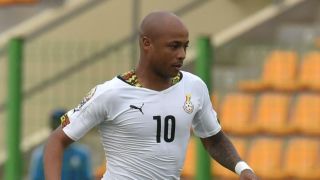 Ghana booked their place at next year's Africa Cup of Nations thanks to a comfortable 2-0 victory over Mauritius on Sunday.

Avram Grant's side had hammered their opponents 7-1 in the reverse fixture a year ago, but found their hosts in much less accommodating mood in Mapou.

Ghana had been 4-0 up inside half an hour the last time these two met, but it took the Black Stars 70 minutes to break the deadlock in this one.

And it was the captain, Andre Ayew, who made the breakthrough by controlling Baba Rahman's cross and firing home.

The lead was doubled two minutes later as Christian Atsu - from another Rahman assist - put the visitors into a commanding position.

It was an advantage the four-time champions never looked like relinquishing as they sealed top spot in Group H with a game to spare and their place in the finals in Gabon in 2017.

After Mozambique's 3-2 victory over Rwanda on Saturday, Ghana knew a draw here would be enough to see them advance.

But there was no question of Grant's side resting on their laurels as they dominated the opening period only to be denied on a number of occasions by home goalkeeper Kevin Jean-Louis.

Their superiority eventually told in the final 20 minutes, however, Jean-Louis unable to prevent Ayew and then Atsu from finding the target and sending Ghana through.