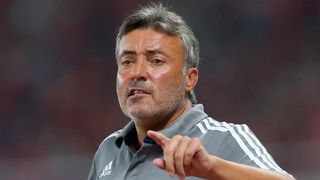 New York City cruised to another win in MLS, while the Philadelphia Union won a seven-goal thriller Wednesday.

Coming off a derby win, City were too good for the Montreal Impact in a 3-0 victory at Yankee Stadium.

It took until the final half-hour for City to find a breakthrough, Jesus Medina's 20-yard effort opening the scoring.

Medina set up the hosts' second, with Ronald Matarrita's clipped effort from the right catching goalkeeper Evan Bush off his line.

The sealer came via Jonathan Lewis, who headed in Matarrita's cross to secure a 3-0 win for Domenec Torrent's men.

In Illinois, the Chicago Fire suffered a thrilling 4-3 loss to the Philadelphia Union at Toyota Park.

Chicago came from behind three times, including through Bastian Schweinsteiger's 94th-minute header.

But, incredibly, Philadelphia found a winner, David Accam drilling in a low effort in the dying stages.

The Union climbed above the Fire and into seventh in the Eastern Conference.