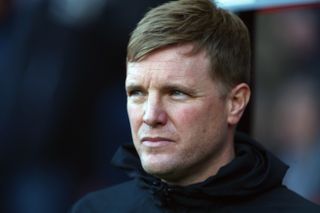 Eddie Howe will enjoy some quality time with his family after his lengthy association with Bournemouth came to an end on Saturday.

The 42-year-old has departed the club by mutual consent a week after relegation from the Premier League was confirmed.

After more than 450 games in charge of the south-coast side across two spells, Howe will no longer be in the post at the Vitality Stadium.

Victory at Everton on the final day could not keep Bournemouth in the top flight and the journey under their former defender, which first started with the Cherries fighting to stay in the Football League in 2008, is over.

He wanted to write to everyone associated with the club in his own words.— AFC Bournemouth (@afcbournemouth) August 1, 2020

In a 1,209-word open letter to the supporters, Howe said: “I now join you as a Bournemouth supporter and will be willing the club on in what I am sure will be a successful future.

“Bournemouth will always be in my heart, but I firmly believe that now is the right time for the club to have a change.

“I have always ensured that every decision I have ever made as manager has been in the best interests of the club and its supporters, and this is no different.

“I’ll now be taking some time away during the summer break to enjoy some quality time with my family and I am looking forward to the next chapter in my life.”

The decision was stressed to be a joint one and the conclusion of Howe’s second tenure with the Cherries means it is the start of a new era for the club.

When he took over in December 2008, Bournemouth were in the League Two relegation zone but under their rookie manager they survived and achieved promotion the following term.

Howe left to join Burnley in 2011 but returned a year later and more success followed before top flight status was secured for the first time in April 2015.

After making more than 300 appearances for the Cherries during his playing career too, the ex-defender has been synonymous with the club for more than two decades.

“It is difficult to put into words what Bournemouth means to me, both as a town and as a football club,” Howe added.

“Having spent a total of 25 years with the club as both a player and a manager, this decision – made together with the club – is one of the hardest I’ve ever had to make.

“However, although the affection and love I have for this football club will always remain, we collectively feel that now is the right time for the club to go in a new direction.”

Defender Steve Cook, who had regular loan spells in non-league before he signed permanently for Bournemouth in 2012, was among the first to pay tribute to his old manager.

He said on Twitter: “Can’t really put the emotions of the last week into words. Now tonight adds to the ‘end of an era’.

“I can’t quite put it into words but I can only thank the manager. He gave me the chance to play in the Premier League which is every boys dream.

“An amazing eight years I had playing under him and something I couldn’t imagine changing. Two promotions, a championship winners medal and five years in the best league in the world. Thanks for the memories.”

Chief executive Neill Blake admitted the decision to part company with Howe had not been taken lightly and was only finalised after days of discussions.

“Eddie Howe is synonymous with this football club, both as a player and a manager, and that will never change,” Blake said.

“He is quite simply an AFC Bournemouth legend, having helped transform the identity and history of the club.

“Myself, our owner Maxim Demin and the board’s gratitude and appreciation for Eddie’s achievements cannot and will never be underestimated.

“A decision like this cannot be taken lightly, which is why this has been discussed together at length over the past few days. It is even harder given our close personal friendship.

“We wish Eddie well for whatever the future holds and hope he enjoys some much-deserved and well-earned time with his family.”

The man who believed in me and pushed me to be better every day, The man who gave me my dream of playing in the Premier League.— charlie daniels (@chazdaniels13) August 1, 2020

Bournemouth full-back Charlie Daniels, like Cook, joined the club at the start of Howe’s second spell in charge.

“The man who believed in me and pushed me to be better every day,” Daniels wrote on Twitter.

“The man who gave me my dream of playing in the Premier League. We achieved what many thought was impossible. What a journey! Thank you for everything.”