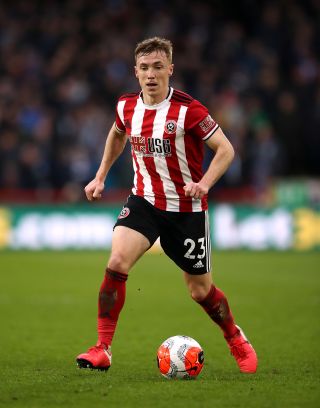 Sheffield United are determined to take this opportunity to do “something special”, with Ben Osborn prepared for an intense mini-season that could bring European qualification and FA Cup glory.

Having been promoted as Sky Bet Championship runners-up, Chris Wilder’s men have been the surprise package of the 2019-20 season and sit seventh in the Premier League standings.

Not only are they tantalisingly close to European football with 10 matches to go but they have an FA Cup quarter-final against Arsenal to look forward to.

Osborn knows it will be hard to pick up where they left off following the three-month coronavirus suspension, but the Blades’ determination to capitalise on their surprise position is clear.

“It’s going to be tough to carry on from that, the whole world has changed since we last played a game,” the midfielder said.

“We’ve just got to attack it like a mini season, with the last few games and the FA Cup to play. We’ve got to try to condense it and hopefully do something special.

“We know there’s an opportunity for us now that doesn’t come around very often, so we’ve got a chance to try to do something special and we’re going to give all we can to try and do it.”

When the prospect of European football was mentioned, Osborn added: “Yes, obviously the league is being flashed up on Sky Sports News and it’s been everywhere during the whole time of this lockdown.

“Just seeing where we are, seeing what’s left and what’s at stake is a massive incentive.

“Everyone is aware, obviously there’s the old cliche take each game as it comes, but we know we’ve got an opportunity here and we will do all we can to try and take it.”

Osborn says they will have to keep reminding each other what is at stake during a strange period that will be without supporters backing them at a rocking Bramall Lane or on the road.

Talks continue about how best to present the remaining matches with fans locked out, with the option of pumping in fan noise an ongoing discussion point.

“I’m not a fan of that idea, I think that’s horrendous,” Osborn said.

“Wouldn’t people rather listen to shouts and listen to what footballers are saying, arguments on the pitch, than fake fan noise? I’m not for that.

“If people want to listen to it at home then fair play to them, but anything fake like that I’m not up for that.”