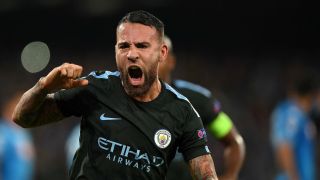 Manchester City have confirmed defender Nicolas Otamendi has signed a new deal, which will run until 2022.

Otamendi's initial deal was due to expire in 2020, with his new terms tying him to City for an additional two campaigns.

The Argentina international came under fire for some sloppy performances following his reported £32million move from Valencia in 2015, but he has shown vast improvement in Pep Guardiola's second season at the helm and has only missed one Premier League game this term.

Otamendi has successfully adapted to the passing style demanded by former Barcelona boss Guardiola, leading the Premier League in completed passes at 2033.

Although Guardiola's side suffered their first defeat of the campaign against Liverpool on Sunday, they remain 12 points clear of United at the Premier League summit.