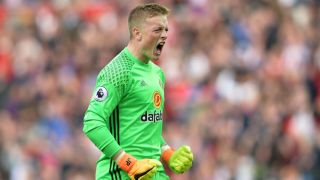 Sunderland goalkeeper Jordan Pickford has been called up to the senior England squad for the first time.

Pickford, 22, was scheduled to play for the Under-21 team this week after recovering from a thigh injury but instead replaces injured Burnley shot-stopper Tom Heaton ahead of the away match against Slovenia on Tuesday.

He joins Joe Hart and Fraser Forster as England's options between the sticks for the trip after Gareth Southgate won his first match in interim charge 2-0 against Malta at Wembley on Saturday.

The Football Association confirmed the news on Sunday, saying: "Goalkeeper Jordan Pickford has been drafted into the England squad after Tom Heaton withdrew with a minor injury.

"The Sunderland stopper was due to link up with England Under-21s ahead of their Euro Qualifier against Bosnia-Herzegovina, but instead will meet up with the senior team in time for Tuesday’s game in Slovenia."

Pickford has only made seven Premier League appearances for his club, five of those outings coming this season.

It is the second squad re-jig in as many days for Southgate, who called up Arsenal's Kieran Gibbs to replace the injured Ryan Bertrand after the Malta victory.