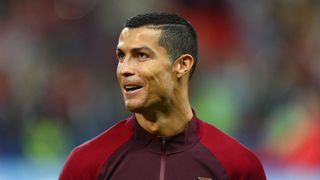 Cristiano Ronaldo has been left on the bench for his team's World Cup qualifier against Andorra on Saturday, with coach Fernando Santos opting not to risk the Real Madrid superstar.

Ronaldo is one booking away from suspension and, with Portugal set to face Group B leaders Switzerland on Tuesday, he was named among the substitutes by Santos.

Assuming Portugal beat Andorra and Switzerland take three points from their home game against Hungary, Santos' men will qualify as group winners if they beat the SwissÂ in Lisbon.

Without Ronaldo - who has hit 14 goals in the qualifying campaign -Â AC Milan striker Andre Silva will be the main attacking threat for Portugal, while Manchester City's Bernardo Silva and Ricardo Quaresma provide the supply lines.