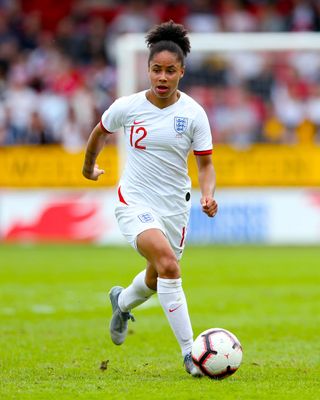 Demi Stokes feels Thursday’s Women’s World Cup quarter-final with Norway coming as soon as it does helps England refocus after their “crazy” match against Cameroon.

The Lionesses face the Norwegians in Le Havre for a place in the semi-finals, four days on from beating Cameroon 3-0 in an ill-tempered last-16 contest in Valenciennes.

Cameroon twice looked as if they may not continue playing as they complained about VAR decisions during a game that also saw Nikita Parris take an elbow to the face, Steph Houghton hurt by a poor challenge and Toni Duggan spat on.

Asked if it was difficult to fully focus on Norway after a match like that, England left-back Stokes said: “I think it’s probably easier, because you’ve just got to move on.

“It’s a big game coming up and it’s just reset yourself and ‘let’s go again.’

“So I think that’s what we are focusing on – quick recovery, doing all the right things and looking forward to the game.

“Norway are a very good team and we’ll show them respect, give them the respect they deserve.”

Stokes thinks England “relayed a positive message from it because of the way we acted.”

The 27-year-old Manchester City player said: “It was a crazy game, obviously we all know that.

“But we’re just so happy and proud of how we as a team acted and how we conducted ourselves. I think that was the most important thing that came out of that.”

Stokes, who was an unused substitute at the Stade du Hainaut having made her World Cup debut in the previous match against Japan, added: “As well, that game, it was more than that.

Living the absolute dream. World Cup debut, through to the Quarters and my family in the crowd & most importantly, being a part of this team 😍❤️ pic.twitter.com/EOoJFHpXhb— Lucy Staniforth (@lucystan37) June 23, 2019

A FIFA spokesperson on Monday said the governing body was “looking into” Sunday’s events and would update in due course.

When asked if she thought Cameroon should be punished, Stokes said: “I can’t tell anybody how to feel. How they feel is how they feel.

“I know obviously FIFA will look into that and they will take care of that.”

Isha Johansen, the president of the Confederation of African Football’s organising committee for women’s football, was quoted by BBC Sport on Monday as saying it was an “embarrassing situation.”

Johansen, also president of the Sierra Leone Football Association, told BBC Sport: “Clearly when something happens like what happened, the disappointment that we saw on the pitch, we as Africans felt for Cameroon as a family, as one.

“We take the collective blame, but at the same time, without sounding like we are condoning what happened, I think it’s all about now actually understanding why it happened.

“These are the issues that I think CAF has got to address and will address, clearly so we can avoid the same mistakes happening.”