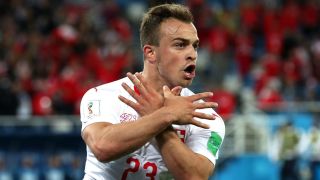 Michael Lang insists the Switzerland camp is more united than ever ahead of Wednesday's key World Cup clash with Costa Rica in Nizhny Novgorod.

A win for Vladimir Petkovic's side would guarantee their place in the last 16, while a draw would likely be enough if Serbia do not beat Group E leaders Brazil.

Switzerland moved into second spot with an impressive 2-1 victory over Serbia in Kaliningrad, although significant controversy emerged from that clash.

Goalscorers Xherdan Shaqiri and Granit Xhaka are each facing FIFA disciplinary action after celebrating with a gesture that appeared to mimic the flag of Albania.

Both players are of Kosovar-Albanian descent, but the celebrations were viewed by some as deliberately provocative towards Serbia, a country that does not recognise Kosovo as an independent state.

Granit Xhaka is the only player who's surname begins with an "X" to score at a Not the most useful of stats, but there you go. June 22, 2018

The incidents also prompted some backlash from Swiss fans on social media, with the national team comprising several players either born in or with parents from other countries.

But Basel defender Lang says the criticism serves only to bring the players closer together in their hunt for a place in the knockout phase.

"Our team spirit has become even better," he told a news conference. "We're a group. We stand together. These problems don't change anything.

"We had a great atmosphere throughout the qualifying for this World Cup. If any of us makes a mistake on or off the pitch, we'll help him to iron it out."

For Costa Rica, the clash represents little more than a chance to go home with pride, with defeats to Brazil and Serbia in their first two games meaning they cannot progress.

Veteran Johnny Acosta hopes to do just that, given the boisterous support the team has had from their travelling fans in Russia.

"It's a match we have to face with everything and, above all, we have to try to get the result so we can leave here with dignity, with a win," he said.

Benfica striker Seferovic has never been a prolific goalscorer, but he really needs a strong performance on Wednesday, both to cement his place in the team for the last 16 and to reduce the pressure on Shaqiri to deliver the goods in attack.

Having contained Neymar for long spells of the 2-0 loss to Brazil, Gamboa will need another top performance to check the attacking runs of Ricardo Rodriguez from left-back, as well as the in-form Steven Zuber.

- Switzerland and Costa Rica will be meeting for the third time – both nations have recorded one win each.
- Costa Rica are winless in their last four World Cup games against European sides (W0 D3 L1), scoring just one goal across those four matches.
- A loss for Costa Rica will mean that they will finish the group stages on zero points – only at World Cup 2006 have they ever failed to pick up a single point at the tournament.
- Switzerland have conceded a goal in each of their last three World Cup games; they had only conceded in three of the previous 10 before this run.
- Xherdan Shaqiri has been directly involved in five of Switzerland's last six World Cup goals (four goals, one assist).