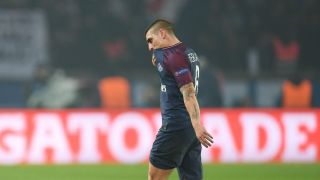 Unai Emery has called on Marco Verratti to learn from his Champions League red card against Real Madrid as he remains a key player for Paris Saint-Germain.

Verratti has been widely criticised following his dismissal for haranguing the referee in the last-16 second leg, as PSG crumbled to a 5-2 aggregate defeat.

But Emery is confident Verratti can bounce back as PSG look to seal the Ligue 1 title in the coming weeks.

"[Verratti] must learn from his experiences, both the positive and negative," Emery told a pre-match news conference ahead of Wednesday's game with Angers.

"He has a lot of character, a temperament. We have talked with him about it many times. He has been frustrated in some games.

"He is the future of PSG and knows that he must improve. He is an important player in the project."

3 - 3 of Paris' last four red cards in the Champions League have been received by Marco Verratti. Nervous. March 6, 2018

PSG bounced back from their European disappointment against Metz at the weekend, with Christopher Nkunku scoring twice and catching the eye, leading Emery to conclude that the club were right not to loan out the 20-year-old.

"[Nkunku] has waited with humility and patience for opportunities," he said.

"We asked ourselves the question of [whether to agree to] a loan, but we decided together that he should stay in Paris. His latest performances show this was the right choice."