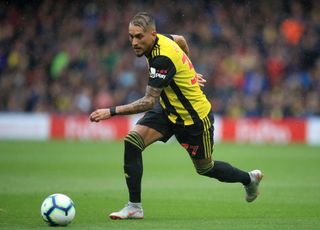 Roberto Pereyra is a doubt for Watford’s FA Cup semi-final against Wolves at Wembley on Sunday due to a hip injury.

Pereyra has been unable to train since the 4-1 Premier League victory over Fulham on Tuesday and his fitness is being monitored closely by the Hornets.

The skilful Argentina international has played a key role in Watford’s successful season and boss Javi Gracia is confident he will be given the green light to play.

“Pereyra felt some pain but I think he can be ready for the next game,” said Gracia, who withdrew the 28-year-old at half-time against Fulham as a precaution.

“Roberto is an important player for us but if he is not available I have other players ready and waiting for the chance to play.”

Tom Cleverley is definitely out because of a calf problem, but Isaac Success and Adalberto Penaranda could recover from respective knee and hamstring problems in time.

“In this moment, we have Tom Cleverley, Isaac Success, Adalberto Penaranda and Roberto Pereyra not training with the team,” Gracia said.

“Pereyra and Success will train on Friday and we will see. They are doubts. Cleverley is out and I don’t know how much time he will need. In the next days it is not possible for him to play.”

Watford are battling with Wolves to finish the Premier League season in seventh place, with a spot in the Europa League the prize on offer.

Their immediate concern is their Wembley showdown, however, as Gracia looks to continue an outstanding campaign by reaching the FA Cup final.

“We’ll decide in the next day the best XI, but I’m always asked about changes and what players I will put in the first XI. I just always try to choose the best XI and this game is no different,” Gracia said.