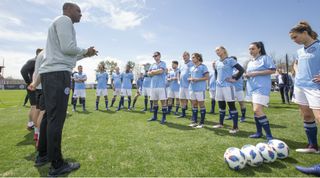 It’s 9am and David Villa has just pulled into the car park. Sunglasses still on, he hops out of his white SUV, tucks a small bag under his arm and breathes in the air of a perfect late-April day in the north-east. It’s the fourth successive day of sunshine and the first true feeling of spring. The clear sky is fittingly on-brand for the City Football Group: a perfect light blue.

The same shade is applied to the building Villa now enters, through a door flanked by women dressed in full Emirates Airlines stewardess attire. Nearly four years on from becoming the team’s first signing, the Spaniard now calls this his workplace.

The 24,000-square foot building feels exclusive as soon as you walk in, with its polished white desks and clean lines. You’ll need a key card to get beyond the reception area, where our first destination awaits.

Today, Villa and New York City FC team-mates Tommy McNamara and Sean Johnson are merely observers. They’ve been coming to work here for about a month already, but today, a group of journalists have been invited to the official opening of the City Training Academy. This is NYCFC’s much-anticipated permanent training home, and our itinerary is much like that of a player on any given training day – with a behind-the-scenes tour added on.

Great way to start the day

Nothing makes an office scamper like free food. Company breakfasts will be eagerly attended. An inbox subject line Leftover cake in the kitchen will set colleagues sprinting. Professional athletes aren’t exactly hard-pressed for the cash to buy their own meals, but food is a common language that can bring together any community. A team that eats together stays together… or something like that.

The first stop for any day at the grounds – player or front-office staff – is breakfast. The City Training Academy has team-hired chefs who run the kitchen and prepare meals while keeping in mind the specific dietary needs of its players. NYCFC head coach Patrick Vieira knows you can't assume that players are eating right when they're on their own – that’s a trust element in any team – but now, at least staff know that two meals each day are setting their players up for success.

Escorting FourFourTwo to the dining area, a staff member recommends the pancakes – a quick way to this writer's heart. There’s a full fruit and protein bar, coffee (yes, the players do have access to sugar; Vieira is no Gareth Southgate) and even high-end taps for sparkling or still water.

Wondering how intense the forthcoming training session is going to be, FFT opts for a bowl of fruit. Pancakes and sprints don’t mix.

Right across the corridor is the dressing room, designed as a sphere so that everyone can see everyone. “No corners for the cool kids,” says our tour guide, Ian Wilson, the Melbourne-based head of infrastructure for City Football Group.

The design in New York mimics those of brother clubs in Manchester and Melbourne – the entire New York building could be mistaken for Melbourne, but for the different crest and player imagery, or the “This City Never Sleeps” faux graffiti on the wall in the dining area. All of that harmony is intentional as City Football Group continues to grow its global empire. When employees like Wilson visit from other locations, they can immediately feel like they're at their usual workspace, even halfway around the world.

Here – 25 miles north of Midtown Manhattan – the cushioned seats are in signature City blue. A small name tag at the top of each wooden door signifies which locker is which. Villa’s is one of the few lockers to remain intact as media infiltrate the area, their names temporarily emblazoned on lockers and shirts.

The other theme also revolves around connectivity – everything is focused on the field. “From the moment they arrive at the park, we want them to see the pitch,” Wilson says.

And you can – everything is surrounded by glass; the coaches' meeting room, video analysis room, Claudio Reyna's office, canteen and gym. Even the stationary bikes are set up to look out the window, so injured players still feel part of what's going on.

We take a slight detour after walking out to enter the gym, where physical performance coach Matthew Cook is waiting to put us through a dynamic warm-up so no hacks pull a hamstring out on the field. Recognising a wide array of fitness levels among the group, Cook notes that he wants to show us the type of stretching players go through – but that nobody has to do every single movement.

“No, make them do everything!”

It’s Vieira standing in the doorway. He’s smiling as he says it, having warmed up to some of the comedy of the day after previous rounds of interviews – and pressing questions about Arsenal. He’s playful, but you can see a hint of the personality trait his players constructively describe as “demanding”.

Most of the exercises are compound movements to loosen muscles and get blood flowing. There are some basics which you’ve heard of, like a kettlebell swing, along with some more amusingly named stretches, like the “deadbug,” in which you lay on your back with all of your limbs in the air – imagine a puppy asleep – and extend one arm and your opposite leg at the same time.

After a dozen of those exercises, which last about 20 seconds each, we’re ready to play… sort of.

In football, the biggest difference between levels is speed of play. It’s the same game, just a lot quicker. That’s how you end up with the one per cent of the one per cent.

This FFT scribe played 15 years competitively, straight through college. The jump from club and high school to college was significant. The level I’ve seen at some semi-pro tryouts was even higher – all of those college players now funnelling into an even more select group – and the professional and international ranks are on a level unto their own. Today, I’ll get a small taste.

Vieira and his staff want to give us an authentic experience, to see what the players do. So we go through a circuit of three different drills: a 3-vs-3 plus one with small goals, a passing exercise stressing angles to receive the ball, and a circle drill requiring the player in the middle to call for a ball and find the open player on the outside of the circle.

Anyone reading this who has played at almost any level will recognise those exercises. For this writer, it feels a lot like a step back in time to college, when we went through similar drills in preparation for our next match. Missing from this session was a particular tactical focus following the circle – sadly, we didn’t go full-field or go to goal – but the exercises stressed the same principles which NYCFC players are expected to master.

The small-sided match stressed team shape and forming a diamond when in possession. Wall dummies served as static defenders in our angles drill, forcing us to see how we needed to open up our bodies. And the circle passing drill exposed a classic lack of communication among new team-mates: the middle player needs his head on a swivel and the open player on the outside must communicate. Otherwise, it’s all too slow.

Vieira floats between the stations to observe, giving some pointers along the way. After our group wraps up in the circle, he explains how he wants midfielder Alexander Ring to receive the ball when he drops between the centre-backs. Vieira describes the importance of how his full-backs open their hips to see the field upon taking their first touch. Each point is a real-world application of the drills we just did. And if Ring & Co. were on the pitch with us, we’d piece together those three points and play them out in real time.

There may not be any contracted players kicking around on this field today (though, Patrick, FFT is happy to send a CV and some game clips), but there isn’t a huge list of players who can say they’ve been coached by Vieira. This is an everyday thing for the pros, but this group of media professionals is noticeably a little star-struck as they get some post-practice selfies with the Frenchman.

His cool demeanour is clear. As a player, this is the type of coach you want to play for. He has high expectations and there’s no nonsense. Don’t expect Vieira’s coaching tool-belt to feature mind games. Work hard, and you know where you’ll stand.

A meal and a movie

“Players aren't in any rush to get out of here,” goalkeeper Sean Johnson says, noting a morning routine which includes catch-up over coffee. The towering netminder cracks a smile as he speaks intently about the amenities of the facility, including the provided meals and the extra perks like ping pong and football tennis. This is a place where you want to hang out.

With training finished, the chefs have already rolled out lunch, and it’s the kind of healthy spread you’d expect. A kale smoothie is the closest you’ll get to a treat here – there are no cookies or brownies to downgrade an athlete’s healthy meal. Roasted broccoli, brown rice/wheatberry pilaf, grilled salmon and barbecue chicken – each item is clearly marked with its calories, fat, protein, carbohydrates and sugar. Everything is calculated.

With the sun shining and the temperature sitting at a perfect 64 degrees, the accordion doors in the dining area have been opened. It’s an indoor-outdoor space between the canteen and the playing fields, a football lover’s five-star dining experience.

Lunch wraps up and it’s time for the final session of the day: video analysis. The 120,000-square foot playing area has four PTZ cameras (pan-tilt-zoom; think spherical security cameras) – one on each side of the field barriers – recording every session. You get the sense that today’s session wasn’t quite up to MLS standards, but the mood in the room is light and jocular as a few playful jabs are exchanged while watching video of missed opportunities.

Head of performance analysis Daniel Fradley drives the high-tech video board, making its touch-screen functions look easy as he draws arrows for where passes should have gone or players should have moved.

Philosophy vs Résumé: Why Arsenal could see potential in Patrick Vieira the manager

Fradley notes that meetings are often small and informal. The coaching staff’s messaging to players is full of intent, giving them only the information they truly need.

He does just that with us, keeping everything to about 10 minutes. Well-prepared food in our stomachs replenishing what was burned off, we are free to go about the day. Just as the players do, there is some lingering around the facility – second looks at some interesting features, conversations and catch-up.

Walk out of the facility and there’s a quiet parking lot which looks down the hill at yet another youth facility which is also home to NYCFC’s girls youth academy. Having put in a day’s work, Villa and his team-mates can walk out of here into small-town anonymity.

This may be the most laid-back day they get in the gruelling MLS season, but it’s hard not to be excited about coming to work when this is what you call your office.