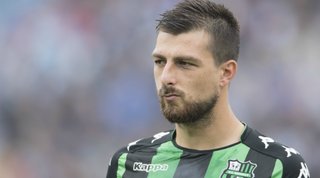 The 29-year-old defender has been a real servant to Sassuolo having played every minute of every match for the club since October 18, 2015.

He completed 100 full matches in a row when he started in their 1-0 win over Sampdoria on Sunday. It's just the latest achievement in his life where he's had to overcome testicular cancer twice.

Most recently, in 2013, he had a tumour removed before being diagnosed with cancer following a failed doping test. Acerbi had tested positive when traces of the hormone human chorionic gonadotropin (hCG), which is produced by some cancerous tumours, was found in his system.

However, he made a full recovery and returned to playing action in September 2014.

After Sunday’s victory, Acerbi said manager Eusebio Di Francesco tried to rest him at points last season but he insisted on playing on.

”I did not want to stop playing, this is my passion,“ he told reporters. "I‘m never satisfied. I prepare myself for the whole week, when I‘m eating, resting and in my head so I can keep playing better.

"After my illness, I’ve realised that I don’t have time for regrets."

Hats off to you, Francesco.