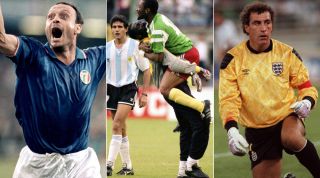 The 1990 tournament took place, like everything should, in Italy, with the finest kits, the greatest upsets, and the best soundtrack that international football had ever seen. The presence of Luciano Pavarotti at the draw, the Three Tenors concert before the final, and the BBC’s use of Nessun Dorma as its theme led to a surge in opera’s popularity in Britain. Puccini swept to the top of the charts and would remain there for most of the summer, before being overtaken by Shostakovich, whose Lady Macbeth of the Mtsensk District would become the sound of 1991.

1990 also boasted one of the World Cup’s most iconic mascots, a stick figure in Italian colours with a football for a head, named Ciao. This caused widespread uncertainty as nobody was sure whether it meant hello or goodbye, and the Italians took advantage of the confusion to win their group comfortably.

Argentina’s opening clash with Cameroon descended into a battle of the ultra-violent baddies against the ultra-violent goodies, like a Michael Bay film fighting a Sam Peckinpah film. Cameroon survived two red cards to stun the defending champions 1-0, and went on to beat Romania and Colombia to set up a quarter-final clash with England. Scout Howard Wilkinson allegedly told England that Cameroon would be ‘a bye’, although it later emerged that he was still trying to translate ‘ciao’.

England and the Republic of Ireland were drawn in the same group, and were immediately quarantined in Sardinia in case their fans gave the Italians any ideas about hooliganism. Alongside them were the Netherlands and Egypt, and between them the four countries produced six matches so putrid that the Sardinian economy is yet to fully recover.

The gushingly sentimentalised Irish ground their way into the last eight without winning a single game or scoring more than a goal every four hours, before going out after Jack Charlton admitted he was desperate to go home. Meanwhile England fluked their way past Belgium and Cameroon and into a semi-final with West Germany. Bobby Robson’s rejuvenated side took the game to extra time when Paul Gascoigne, until then England’s best player, was booked for a late tackle, which would have seen him suspended for the final. As Gazza’s lip began to quiver, Gary Lineker famously mouthed to Robson “give him all the chicken he can eat”, a noble sentiment that ultimately backfired.

In the shootout, Peter Shilton’s 40-year old reflexes saw him dive up to a minute too late, often while his team-mates were taking their penalties. Stuart Pearce’s shot was saved before Chris Waddle, needing to score to keep his nation’s hopes alive, blazed over, and England were out. A devastated Waddle sank to his knees, as did the rest of the England team, and, several minutes later, Shilton.

The final was a turgid affair in which both West Germany and Argentina were primarily concerned with not losing, in contrast to past finals where teams had gone all out to lose. An Andreas Brehme penalty settled the match, which was marred by a number of Argentine players manhandling the referee Codesal, who, in fairness, was a bit of a wally.

West Germany’s victory was hailed as conclusive proof that communism didn’t work, and within months East Germany ceased to exist. In an attempt to discourage the sort of cynical, defensive play that had dominated throughout the tournament, FIFA outlawed the back-pass, the tackle from behind, and the Republic of Ireland, and ordered the breakup of Yugoslavia. Scarred by their shootout heartbreak, England have avoided all mention of penalties ever since, especially in training.