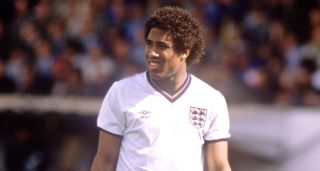 John Barnes has said that scoring a career-defining stunner, dribbling past the Brazilian defence at the Maracana in 1984, was an “out-of-body experience” – since he can’t remember doing it. When FFT asks for the recollections of the men he ran past, the response isn’t so different.

“English goal... English goal... are you sure it was in Rio?” asks right-back Leandro, the first to be tricked by the then-Watford winger. We find a video clip to jog his memory. “Oh, I remember now! Yes, that was a nice goal he scored. What’s he called again?”

It seems Barnes’ mazy dribble is less well-known in Brazil than it is in England. “Well, it was a goal we conceded; we usually prefer to forget those,” jokes Leandro. “It’s fair that the English love that goal, but in Brazil we have a better memory for World Cup goals. We all remember Michael Owen’s goal against Argentina – but that’s because it was against Argentina!”

The greatest goal ‘Digger’ ever scored came in a friendly that England only played because they hadn’t qualified for Euro 1984 in France, and helped to at least briefly lift the nation’s spirits.

Ricardo Gomes was another defender to be beaten in that epic run by Barnes, oddly clad in white shirt, white shorts and red socks. Gomes says any Brazilian would be proud to have scored it.

“He made us all confused about what he’d do and that’s why no one tackled him. There was nothing I could do.” Leandro agrees. “Barnes stopped the ball really well and I went to the right because I thought someone could be coming up from behind. That gave him more space.”

“Great goals at the Maracana can get a plaque with the date and name of the person who netted it,” adds Gomes. “I believe Barnes probably deserves to be there as well.”

This feature originally appeared in the August 2014 edition of FourFourTwo magazine. Subscribe!