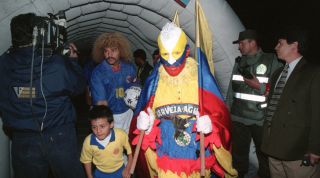 At what point in your law degree did they teach you to dress up as a bird?

I didn’t actually finish my degree. I’m from Barranquilla on the Caribbean coast, which has one of the world’s best carnivals. There’s a culture of dressing up, my mother taught it to me. So I dressed up as a shark to support Junior and as a tiger to support Sporting [both local teams]. When Colombia qualified for Italia 90, I’d been studying for five years and I had to balance up the options: whether I wanted to be Colombia’s No.1 fan or be a lawyer. I made the choice, and it was one of the best decisions of my life.

Where did the idea for the bird costume come from?

I realised that the condor symbolises freedom. And it became a real show because I flew. I defied the law of gravity. Obviously I put my life at risk.

Quite. When Colombia scored an injury-time equaliser against West Germany, you nearly paid the price.

When Germany scored, other fans lost heart. Not me, that’s why I’m a leader. I support Colombia until the ref blows the final whistle. Then Freddy Rincon got to Valderrama’s masterly pass and scored. The guys holding me up got carried away, and let go of the rope. Fortunately, one guy had tied it round his waist, so he got pulled to the balustrade and I didn’t fall all the way. Otherwise, this interview would be post-mortem!

Did you hold a grudge against the people holding the rope?

No, it was just a product of their passion.

How was Italy otherwise?

I slept in parks, in train stations, on beaches. I slept in heaven and hell, but I was always driven by passion for football. Actually, I’ve got three, equally-important passions: Christ, football and Colombia. In Italy, when I walked through the streets, some people shouted at me “Colombian! Cocaine! Pablo Escobar!” That hurt a lot, because I’m from the good part of Colombia.

The only man who flapped more than you at Italia 90 was Rene Higuita, whose error against Cameroon put Colombia out of the tournament. How did you feel at the time?

I don’t like to talk about errors. My job is to support the 11 players on the pitch. If you watch the video, you see the number of chances we had to win that game. We had a great team, and didn’t deserve that kind of event. But thank God for creating Higuita as he is, with all his madness. Football is about having fun, it needs personalities.

What has happened to Colombian football since the 1990s?

We thought that one generation would last forever, and we never trained young players. When Colombia didn’t qualify for Japan/Korea 2002, I felt so empty inside that I went anyway. I made sure Colombia was represented there, not by the team but by its No.1 fan.

So you’re still Colombia’s No.1?

2010 marked 20 years of the Birdman. But I feel the anniversary went unnoticed. After the Chile game [which ended Colombia’s hopes of qualifying for South Africa], I was alone in the bathroom, my tears getting mixed up with my make-up. I felt alone. Now do you understand why I want the museum?