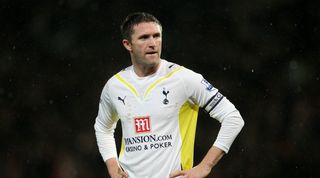 Dorian Dervite didn't quite make the grade at Tottenham. He joined the club's academy at 18, but failed to make a Premier League appearance before leaving for Villarreal B in 2010.

He eventually returned to England with Charlton in 2012, and joined Bolton two seasons later.

Still, it seems one of the senior players at White Hart Lane players managed to make an impression on him. Speaking on Le Vestiaire (on SFR Sport), Dervite recalled this charming little anecdote about Robbie Keane from a night out in London.

“After two or three drinks, he started coming towards me and said to me 'I will show you how to do a real slide-tackle in England',” said the Frenchman. "I held onto his glass and then he started to sprint and finished by tackling two women who were at the bar.”