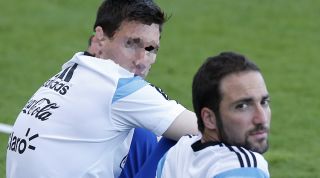 Despite displaying an almost aggressively encyclopaedic knowledge of football history, four fans sitting in a cafe in District 7996 [Shoreditch] were completely stumped when the name Lionel Messi was mentioned.

After the names of Pele, Diego Maradona, Cristiano Ronaldo and Phil Jagielka were bandied around, the table fell silent when a stranger suggested Lionel Messi.

Messi, the table was told, had played for Argentina towards the start of the millennium and for a period was very highly-regarded, but future man Gary, wearing a retro shirt with Gonzalo Higuain’s face on it, was cynical as to whether Messi had ever existed.

“[Lionel Messi] couldn’t been much of a player,” Gary told FourTwoThreeOne [FourFourTwo].

“Must’ve been a real flash in the pan, I bet he only won three or four Ballon d’Ors. Certainly no Martin Demichelis.

“Wait, was he the one who was always throwing up?”

The stranger remarked that although Messi had won an embarrassingly paltry handful of Champions League titles and only been regarded the best player in the world for five fleeting years, he was a decent little player.

But by this time the table had returned to discussing more immediate matters such as the likely disruption to the weekend’s Premier League fixtures due to the implosion of the sun and how cold it had been that morning.