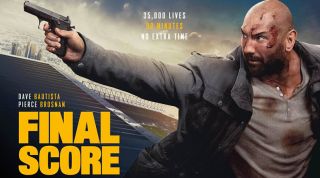 There’s a cracking moment early in Final Score where the WWE wrestler-turned-thespian Dave Bautista calls a special security line to blurt out a red alert. “There’s an emergency situation at West Ham Stadium!” he wails. The bloke at the other end basically just says, ‘You’re having a laugh mate’, and then they block the call. So there is at least one scene here that’s fairly realistic.

This is Sky’s heavily-hyped new movie which smashes together their two big bankers: football and films. The result is essentially Die Hard in a Stadium, but instead of Bruce Willis they’ve got Bautista, best known as the big blue bloke from Marvel’s Guardians of the Galaxy (although he’s currently in dispute with Disney about them sacking GOTG’s director, so might be stuck doing football thrillers for the foreseeable).

Actually, Bautista is a producer here, and their choice of club-in-trouble is West Ham, which makes sense. It worked for the weirdly popular hoolie flick Green Street, which even spawned two grim sequels, Green Street 2: Stand Your Ground and Green Street 3: Never Back Down, although thankfully they gave up before the Olympic Stadium move (imagine the edgy pre-match drama if they rebooted it now – Westfield: Nice Glass of Rosé at Jamie’s Italian).

The unique angle here is that the filmmakers gained access to the Boleyn Ground, pre-demolition, so got to do the sort of damage that Green Street’s mythical Millwall nutters could only fantasise about. Beloved Hammers co-owner David Sullivan is even credited as executive producer, and – according to the IMDB – also makes a cameo as ‘West Ham/Dynamo fan’. Well, he’s got a Russian hat. (But perhaps this time he’ll elect against arousing suspicion for some dodgy reviews on one of his own films.)

That brings us to the plot, which is surprisingly complicated given that most people watching Final Score will no doubt be semi-trollied. In a nutshell, the Boleyn is hijacked by revolutionaries from a mythical ex-Soviet state, for reasons that needn’t bother us here, and which ruins Bautista’s evening.

He plays Michael Knox – middle name presumably ‘Hard’ – a military type who heads to London to hang out with Danni (Lara Peake), his dead buddy’s teenage daughter. Which is less dodgy than it sounds. She’s a Hammers fan so he buys tickets for their next match, the last ever at the Boleyn – which is only the bloody European Cup semi-final.

Er, WHAT MATE? Now, Sky haven’t shown European games for a while, but they’re definitely aware that (a) the European Cup finished in 1992, and (b) West Ham qualifying is the weirdest bit of the whole film. Whisper it, but maybe the big modern competitions – your EPL, UCL, EFL even – just weren’t mega keen on getting involved with that Eastern-Europeans-booby-trap-a-stadium vibe.

Jonathan Pearce seems happy enough, though, chuntering away over the match action; but then he commentates on every game like it’s a Euro semi and there’s a bomb in the toilets.

You can't do that

Final Score doesn’t exactly go for gritty realism, then. The players have made-up names, and the fans seem curiously unmoved about West Ham miraculously reaching the cusp of European glory. One important twist involves Knox and Danni getting separated because she sits with a boyfriend instead, as if there’d be spare seats. At the Olympic Stadium, maybe.

Anyway, none of this really matters: once the C4 is ticking, there’s barely time to worry about plot holes. While Knox looks for Danni, the mad-eyed head hijacker scans the stands for his brother, played by a bewildered-looking Pierce Brosnan who’s disguised as former Exeter manager Paul Tisdale. The legendary former Bond only has about five lines in the whole film, but does get a dramatic speech like Robert Shaw’s in Jaws. Where Shaw recalled sharks, though, Brosnan’s is about a lonely chicken. Different impact.

BIG INTERVIEW Robinho – "I had a fight with Craig Bellamy once, but then who at City didn’t?!"

This is almost certainly not based on a true story. Knox launches a motorbike from one stand roof to another but nobody really notices, and fights a huge Bond-style henchman despite playing that role himself in Spectre. Henchmania! Meanwhile, comic relief comes from the hapless steward Faisal (Amit Shah), who has one big gag at the end that’s either absolutely hilarious or horribly offensive. We’ll let you decide.

Still, it’s not the most shocking bit. Halfway through there’s a scene that will genuinely get football fans standing up and shouting “YOU CAN’T DO THAT!” (we did), involving two real ex-Hammers and, slightly randomly, early-90s ITV football anchor Matthew Lorenzo. No spoilers! All bets are off from then on, and it’s all oddly compelling as Knox hurtles around the concourses.

If this ever turns up on BluRay, the making-of documentary would be genuinely fascinating. As for a potential sequel, Die Hard 2 was set in a great sprawling airport, so expect something like Final Score 2: Escape from Wembley’s Car Park. Now that would be stressful.