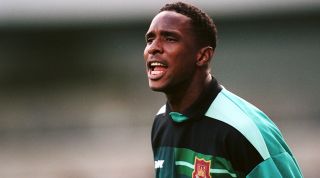 Warhurst boasts one of the most bizarre individual goalscoring seasons in English football history, having plundered 18 goals for Sheffield Wednesday in 1992/93 – leading to this unlikeliest of England call-ups.

He would later become known as a journeyman pro who played for 16 different clubs, but back as a 23-year-old, centre-back Warhurst had been shunted forward in an injury crisis and enjoyed the most effective campaign of his life. So effective, in fact, that he capitalised on injuries to Alan Shearer and David Hirst to make Graham Taylor’s squad as a striker for a USA ‘94 qualifier against Turkey. Five days later, however, he was out thanks to a pulled muscle in training.

Although he later became a Premier League winner with Blackburn, Warhurst never got the call from his country again – and never managed more than three goals in a campaign, having been pushed back to his utility role(s).

SEE ALSO 18 of the most unlikely individual goalscoring seasons ever

Strange as it now seems after he went on to represent Trinidad and Tobago on 26 occasions, Hislop was on the verge of becoming a fully-fledged England international back in 1998. Then battling with Shay Given for the No.1 shirt at Newcastle, he was called up by Glenn Hoddle for a friendly with Chile.

The one-time England U21 international took no part in the game – which ended in a 2-0 defeat thanks to a brace by the impressive Marcelo Salas – leaving him free to switch back to the country of his parents’ birth a year later. He was in goal as Trinidad and Tobago came close to holding England in the group stage of the 2006 World Cup.

In the late ‘90s and early ‘00s, England’s lack of natural left-footed players became a source of endless debate. A series of different and somewhat unfashionable alternatives were tried, resulting in call-ups for the likes of Steve Guppy, Darren Eadie, Alan Thompson and Steve Froggatt.

Coventry winger Froggatt was twice selected by Kevin Keegan but denied the chance to make his debut the second time around when a Nicky Summerbee tackle injured his ankle and ruled him out of contention.

Even worse, it was to end his career prematurely – surgery was unable to fix the problem. Froggatt announced his retirement after a year on the sidelines trying to recover.

Sven-Goran Eriksson was a big fan of the young Blackburn striker whose goals fired Rovers to promotion and a League Cup win in their first season back in the Premier League. Jansen was duly rewarded with a call-up for a friendly against Paraguay in April 2002, but was forced to withdraw because of illness.

He was hopeful of being included in England’s World Cup squad, but was overlooked for experienced Arsenal defender Martin Keown at the last moment. That summer, Jansen was involved in a motorbike accident while on holiday in Italy and spent six days in a coma.

Although he was able to resume his career, he was never quite the same player again.

After making his breakthrough at Liverpool, Thompson had to move elsewhere in search of regular first-team football. He dropped out of the Premier League with Coventry but made a triumphant return at Blackburn in the summer of 2002, and a good opening to the season under Graeme Souness led to his England inclusion under Sven-Goran Eriksson.

Thompson didn’t play against either Slovakia or Macedonia, however, and wasn’t able to earn another chance as a series of injury problems affected his career. It was eventually cut short in 2007 at the age of just 30, following brief spells with Portsmouth and Bolton.

A committed box-to-box midfielder who played an important role in Fulham’s rise through the divisions – culminating in their first promotion to the Premier League – Davis made an impressive start to life in the top flight too. As a result, he was one of many uncapped players in Sven-Goran Eriksson’s squad for the friendly against Australia.

The match, played at Upton Park, ended in a humbling 3-1 defeat as Eriksson fielded two entirely different teams in each half. While Wayne Rooney and Francis Jeffers, (who scored England’s consolation) were among those to make their debuts, Davis was one of five players to remain on the bench throughout.

The former Peterborough goalkeeper was tipped for the top from a young age, playing regularly for England’s various age-group teams – although he only ended up making a single appearance in the Premier League (for Cardiff).

In 2008, an injury to Chris Kirkland led to his inclusion in Fabio Capello’s squad for friendlies against the USA and Trinidad and Tobago. At that stage, Lewis still hadn’t played higher than League Two level, and didn’t get the chance to test himself for the Three Lions – he was an unused substitute in both games.

Although his career hasn’t quite panned out as expected, a move to Aberdeen in 2016 saved him from a prolonged spell on the fringes at Cardiff.

He had great technique, but discipline and focus certainly weren’t Bullard’s strong points as a player. It was therefore a surprise to see the authoritarian Fabio Capello turn to Fulham’s court jester when he was short of midfield options for World Cup qualifiers against Andorra and Croatia in September 2008.

Bullard didn’t make it onto the pitch during either game, although he was called up for a friendly with Germany two months later. He was an unused substitute for England’s 2-1 win at the Olympiastadion, which proved to be his final involvement with the national team.

Now, Bullard’s international career is best remembered for his thoughts on Capello. “I’d try to get the boys singing ‘Postman Pat’ on the back of the coach,” he later recalled. “I mean, come on boys... there were about six of them at it. The other 20 bottled it.”

He moved to Hull in the January transfer window and suffered terribly with injuries during his time on Humberside.

The midfielder tyro had not long made the controversial move from Sunderland to his boyhood club Newcastle when an England call arrived. Colback was one of four uncapped players named in Roy Hodgson’s squad for matches against Norway and Switzerland, alongside Calum Chambers, Danny Rose and Fabian Delph.

England had crashed out of the World Cup group stage earlier that summer and Hodgson was looking to freshen things up. While Chambers and Delph both made their debuts, Rose had to wait – but at least he got (and stayed) there.

A calf injury forced Colback to drop out of the squad and he hasn’t come close to earning a recall in the four years since.

Quiz! Can you name the line-ups from England 3-0 Switzerland at Euro 2004?

Where did it all go wrong for Berahino? In 2014, the sharp-shooting West Brom striker was named England Under-21s player of the year ahead of a certain Harry Kane, but their careers have gone in dramatically different directions since then. One won the World Cup Golden Boot; the other finally scored his first competitive goal in well over two years.

An excellent return of 10 goals in 11 appearances for the U21s, together with an excellent run of form at club level, convinced Roy Hodgson that Berahino was ready to step up to the senior squad. He was invited along for a Euro 2016 qualifier against Slovenia and a friendly against Scotland, he took no part in either and has since chosen to represent Burundi, the country of his birth.

It’s so far, so good – the 25-year-old scored on his debut against Gabon in a 2019 Africa Cup of Nations qualifier on Saturday.