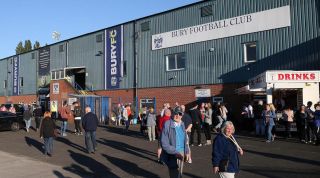 Being a Bury fan has been a real rollercoaster ride – I’ve seen us go from third-bottom of the Football League to achieving back-to-back promotions to Division One. Over the last decade, we’ve gone right back down to the basement before becoming an exciting yo-yo team in the lower leagues.

But how have we gone from getting promoted to League One as recently as May, to being on the brink of going out of business and being kicked out of the League?

Off the pitch, we’ve often found ourselves appealing for funds to survive; 15 years ago, we came out of administration thanks to help from the late Neville Neville (father to Gary and Phil). Things were looking up under the stewardship of Mark Catlin, until he departed to help save Portsmouth.

Stewart Day took over as chairman in 2013 after a winding-up petition had been issued. This unknown property developer and Huddersfield fan proclaimed himself as a saviour and certainly put on a good show with the media – inviting press to the Carrington training facility (loaned from Manchester City), talking up plans for a new stadium and splashing cash on high-earners like Leon Clarke, James Vaughan and Jermaine Beckford.

Fans were worried where the money was coming from, given that Day was mortgaging the ground with loans at astronomical interest rates (indeed, the club now owes an estimated £12 million and counting). Former directors and ambassadors were frozen out, and shareholders’ AGMs cancelled. After the disastrous 2017/18 season, when an expensive squad assembled by Lee Clark (and others) finished bottom, Day went quiet and allowed club legend Ryan Lowe to take charge – with huge success.

Then, out of the blue, it emerged that Day had sold the club for £1 in November to Steve Dale, known only as an asset-stripper who had ‘beaten God’ in recovering from leukaemia.

The football continued to sparkle, though, and Bury were seemingly on an easy route to promotion – that was, until, it came out that neither players nor staff were being paid and were relying on food banks to eat. Dale claimed that the financial mess left by Day was far worse than he’d envisaged, and he began to alienate himself from fans.

Thankfully, we went up at Tranmere in extraordinary circumstances – but that night of celebration was tinged. We knew the long-term stability of the club was bleak.

Sure enough, the exodus began – Lowe and five of his squad went to Plymouth, leaving just six contracted players. Staff were handed notices, with Dale claiming that they were “extorting” the club in asking for their unpaid wages.

BURY NEWSKeep up with all the latest on Bury here

The more that fans became desperate to get rid of Dale, the angrier and more defensive he became – confronting them and referring to himself as a “grizzly bear”. Meanwhile, Day had absconded the country just as his company was placed into administration, owing over £23 million. Dale managed to get a Company Voluntary Arrangement (CVA) approved, meaning non-footballing creditors now only need to be paid 25p in the pound. The result was a 12-point deduction.

Little-known Paul Wilkinson was appointed as manager on the cheap, recruiting mainly trialists for the last-minute friendlies. But then the EFL announced that Dale hadn't shown proof of funds for the season, which has led to our first four fixtures being suspended, and a notice that we will be removed from the Football League after 134 years unless this is satisfied by August 22. Next Thursday.

A year with Marcelo Bielsa: the inside story of Leeds United's revival

Many admonish the EFL for taking a hardline stance after approving Dale’s takeover, but as his ownership began mid-season, he didn't have to pass the ‘fit and proper person’ test and now runs the club entirely on his own.

The club then issued an extraordinary statement (written by dissenting staff) that an offer to buy the club had been made, urging Dale to accept and save our existence. Despite Bury North MP James Frith informing Dale of numerous offers all summer, he came out to berate his skeleton staff and deny any such offers existed.

Although he has now accepted he has to sell, Dale shows no willingness to do so, instead continually patting himself on the back for saving “the old girl” via the CVA. He is even looking for ‘compensation’ for all the stress caused by these “idiot fans” as part of a deal.

So the next time you think about complaining that your chairman isn’t spending enough, or that your manager isn’t playing exciting enough football, spare a thought for fans of clubs like ours that simply want to watch our local team play on a Saturday afternoon. With Bolton and Coventry also on life support and many others on the brink of collapse, this is a problem that isn’t going away – even if the Shakers manage to survive to live another day.

QUIZ Can you name Liverpool's line-ups from each UEFA Super Cup victory since 2001?

HOW TO Premier League live stream 2019/20: how to watch every game from anywhere in the world