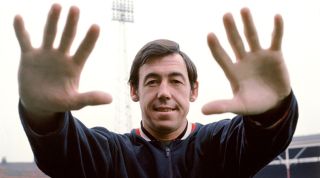 “When I was a teenager, I was lucky to see a cup final on television, and here I was, walking out at Wembley to play in one. We lost, but it was an experience. That was where it all started for me.”

“It doesn’t get any better than winning the World Cup, shaking hands with the Queen, with the Wembley crowd going berserk. I was so happy when Geoff Hurst banged that goal in at the end. Was his other one over the line? Of course! I was in the perfect position...”

“Everyone still talks about the save from Pele. It was just instinct. You can’t anticipate a header because your body weight would be all wrong, but in training beforehand I had Bobby Charlton hitting shots into the ground because the pitches were rock hard in Mexico. That helped me predict the bounce, but I honestly thought it had gone in. I looked around, and said to myself: ‘Banksy, you lucky tw*t.’”

Tony Waddington had put together a great squad, and although Chelsea were the favourites, we won. Half of us were in tears; Stoke hadn’t won a cup final in 100-odd years. The celebrations back in the Potteries were incredible.