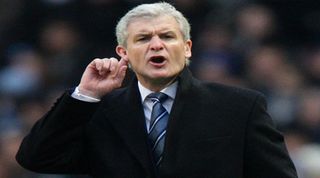 New Stoke City boss Mark Hughes has promised the club's fans a new dawn at the Britannia, vowing to break with the club's negative style of recent years and to introduce a more modern, continental brand of violence.

Under former boss Tony Pulis, Stoke became notorious for outmuscling teams with tactics that would occasionally tread the line between illegality and assault. It was the failure to evolve a more progressive style ultimately cost Pulis his job, and Hughes believes that he is the man to deliver it.

"This is a well-run, stable club, and it's a question of tweaking the little details to get us to the next level," Hughes explained to FourFourTwo. "For instance, we might want to replace the odd two-footed tackle with a sly rake down the calf. Perhaps it's time to phase out some the flailing elbows in favour of a careful dig in the ribcage."

Hughes acknowledged the skepticism of many Stoke fans, who are unhappy that the simple, workaday violence that has kept them in the Premier League for four years and counting might be sacrificed for something less substantial.

"I can reassure all supporters that if anyone knows about egregious violence on a football pitch, it's me," said Hughes, citing the seventy yellow cards he accrued in his Premier League career. "Anyone who played against my Blackburn Rovers side can tell you that my teams play the game the way it's meant not to be played."

"Assuming they've got any teeth left, of course."

In another break with the past, Hughes has released all 38 of Tony Pulis's baseball caps, telling journalists that his only headgear will be a broad-brimmed velvet trilby, or, in FA Cup matches, a peacock-feather fascinator.