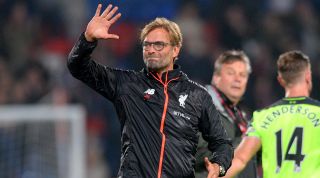 Jamie Carragher has told FourFourTwo that Liverpool need a period of regular Champions League football before they are ready to challenge for the Premier League title.

The Reds have not qualified for the Champions League in each of the last two seasons but are currently in the Premier League’s top four and on course to return to the competition next term.

Carragher believes his former club are on the right track under boss Jurgen Klopp but thinks they may be some way away from a genuine tilt at the title, having faded mid-season following a strong start to the current campaign.

“I think Liverpool have got the sixth-best squad in the league so to be in the top four would be a very good season,” the Sky Sports pundit says.

“At the moment, I don’t think they’ve got enough to challenge for the league. You saw the reasons why they fell away in the middle of the season - they didn’t have reinforcements, especially when Sadio Mane was gone for the Africa Cup of Nations.

“It’s very difficult; they don’t have the revenue to compete with the others, it will be a building process. It won’t be a case of splashing the cash and going for the league next season. I think it will have to be a gradual improvement similar to when I was playing under Houllier and Benitez, when we built to a title challenge. We never quite pulled it off, but we came very close on a couple of occasions.

“If Liverpool can get into the top four for three or four years on the bounce, then that would be a major achievement. You cement your position in there and then maybe think, ‘OK, let’s go for the title’.

“Klopp has signed a contract for five or six years and I’m sure each year he’d be looking for progression, so maybe after another good two or three years Liverpool should have a great chance.

“But you can have plans - other teams have got plans as well. I think with Klopp and Liverpool it’s more of a building process than just splashing the cash.”

Back is the future

The first building blocks towards that title challenge must be at the back, Carragher believes.

“They need to be better defensively,” the former centre-back tells FourFourTwo. “Attacking wise they’re out of this world, they’re as exciting as anyone in the Premier League. They need a goalkeeper and a couple of defenders, definitely. That’s important.

“The fact that they can score so many goals means it’s maybe not as vitally important as some other teams – and their defensive performances against the top sides have actually been very good, which leaves you scratching your head. But against the smaller teams, set-pieces and counter-attacking football are the obvious way teams in the bottom half score goals and Liverpool are susceptible to that.

“It’s difficult to bring in the right players because there’s a dearth of centre-backs around in football. All the teams in the Premier League are looking for them. Look at the problems Manchester City have had bringing centre-backs in - they’ve spent hundreds of millions over the last few years and they’ve still not got it right. They’ll be looking again, as Manchester United will.

“Liverpool have had no European football this season which has been a bonus in the league, but next season they will need a bigger squad.”

Sky Sports will show the biggest games in the Premier League run-in including Manchester United vs Chelsea, the North London and Manchester derbies and more