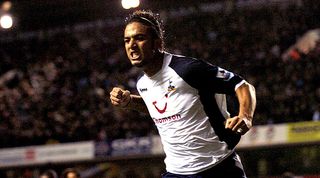 My first game for the Egyptian national team against the United Arab Emirates is one of the matches I will never forget. I was young, not even 18, and I became the youngest player in the history of the national team.

Egypt coach Mahmoud El-Gohary received a lot of criticism for playing me at such a young age, ahead of more experienced players. There was criticism directed towards me as well – the public had their doubts – but despite that I scored on my debut and we won.

This Inter match was the second leg of our UEFA Cup quarter-final. It was a really important game with a lot of pressure on it. We had won the first leg 1-0 at home, and I played 90 minutes in that second leg at San Siro.

I was playing against amazing players such as Fabio Cannavaro, Ivan Cordoba and Javier Zanetti, and Marseille managed to win 1-0 again. We reached the final that season, but lost 2-0 to Valencia.

My first match for Tottenham was so special. I hadn’t been playing consistently at Roma and, if I remember correctly, my debut came just three or four days after I’d arrived in England. I scored twice and we won the game.

The opening game was an important one, particularly as the tournament was in Egypt. There’d been lots of criticism of the team and there was pressure on the coach, Hassan Shehata. It was a big responsibility to carry the team home, but I scored the first goal of the finals and we then won the competition.

This feature originally appeared in the September 2018 issue of FourFourTwo. Subscribe!