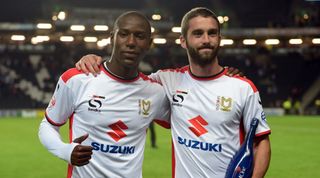 Fresh from beating the 2012 Premier League champions 4-0, Karl Robinson's players returned to their homes ready to bask in the adulation of their loved ones, only to be met with indifference bordering on disdain.

Two-goal hero Will Grigg said: "I got two texts after the match, one from my Mum reminding me about my Dad's birthday, and one from O2 about my data allowance.

"I asked Mum if she watched the game, and she said 'what game?', and I said 'the game against Manchester United in which I scored two goals', and she said she caught the highlights while channel-hopping.

"There was a bit of an awkward pause, and then she told me not to get Dad socks because she was getting him socks."

Fellow double goalscorer Benik Afobe was also met with blank stares when he brought up the Manchester United result among friends.

Afobe's friend Lewis Matthews said: "I'm quite happy for the Acrobat Reader [Afobe]. It would have been a shame for an ambitious club to get knocked out of the cup this early.

"Sometimes we have to tell the Afoblerone [Afobe] not to get carried away, but why would he be getting carried away? You can only beat what's in front of you, after all. It's not like he's done anything that special."

Afobe has posted a YouTube video of his side's four goals to Facebook, but at the time of writing it had received just one 'like', from Will Grigg.

Grigg, who also shared the video, said: "Since I posted it, the only person who's liked it is my Mum, which she only does when she's passive-agressively reminding me about something. I get it, Mum, I won't buy him socks."

Grigg added that his plans to create a scrapbook about the match have been thwarted by the media's almost complete lack of interest.