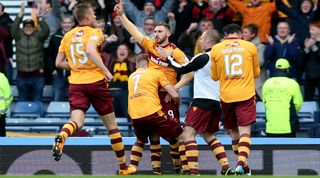 In the 73rd minute of the semi-final, with Motherwell already 1-0 up thanks to Moult's scrambled goal 20 minutes earlier, the 25-year-old striker provided an excellent finishing touch to lob Gers goalkeeper Jak Alnwick.

Naturally, there was delight in the stands at Hampden Park – not least as Motherwell boss Stephen Robinson happened to be right up there after he was dismissed for clashing with Rangers boss Pedro Caixinha on the touchline.

Motherwell will return to Hampden for the final against Celtic on November 26, when Moult & Co. will be looking to shock Brendan Rodgers' all-conquering side.