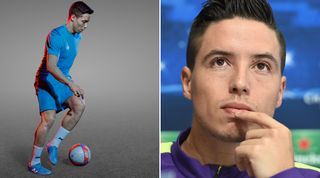 How do you evaluate last season? What would the team have done differently, given a second chance?
Oh, the season was very disappointing for us. We secured second place, which was really important after what happened during the season, but when you're a club like Manchester City you want to be the best and win trophies every year. Especially after what happened in 2013/14, to finish last season without silverware was a blow for the team, but we showed that we had a lot of character because we ended up having a strong finish to secure second place. We're ready to attack the next year and bring the silverware back to Manchester.

How do you think City can improve next season?
This is a question that the staff have been thinking about. I think we're going to buy some players to try to improve the squad, to improve the depth as well – because if we want to be competitive in all the competitions, we need to have bigger depth in the squad. If we want to be competitive in the Champions League, which is one of the main targets of the club, and if we want to fight for every competition, that’s what you need to do – and that’s something that we’re going to improve in the summer.

Which player impresses you most in training at City?
Tough one. It’s hard because we have players who are good in the games, and players who are really good in training. Like, Kun [Aguero] isn't the best player in training, but I think he's an amazing performer. You know, it's a tough one, but every time we actually play I would say Kun or Yaya Toure.

How big a deal would it be if Yaya Toure left?
I think Yaya is massive for Manchester City. He had an on-and-off season because a lot of things happened to him – he lost his brother [Ibrahim], and there was a lot of speculation over his future as well. But we saw that by the end of the season he was back to his best, and after [the season ended] I spoke to him, and he's ready to have a great season next year. And you know that when he's on his game, he is really important for us – maybe the best box-to-box midfielder on the planet. I’m really positive for Yaya’s future.

Finally, where do you see yourself next season?
[Laughs] In Manchester! I signed a five-year contract [last summer] and everybody at the club wants me to stay, even if the journalists want to say otherwise. It’s up to the manager. We had an on-and-off season, I had a lot of injuries and I want to take back the chance. But I will be in Manchester, having a great season and winning silverware – that’s what's going to happen next year.